If you ever plan on visiting the ever-so-famous Machu Picchu, you will most likely pass through Cusco. So what is it that makes this city such a typical stop for travelers en route to the most famous spot in the country? I’d have to say that it’s the mystic combination of Inca and Spanish culture, coming together to form an unforgettable city like no other place you will ever see. 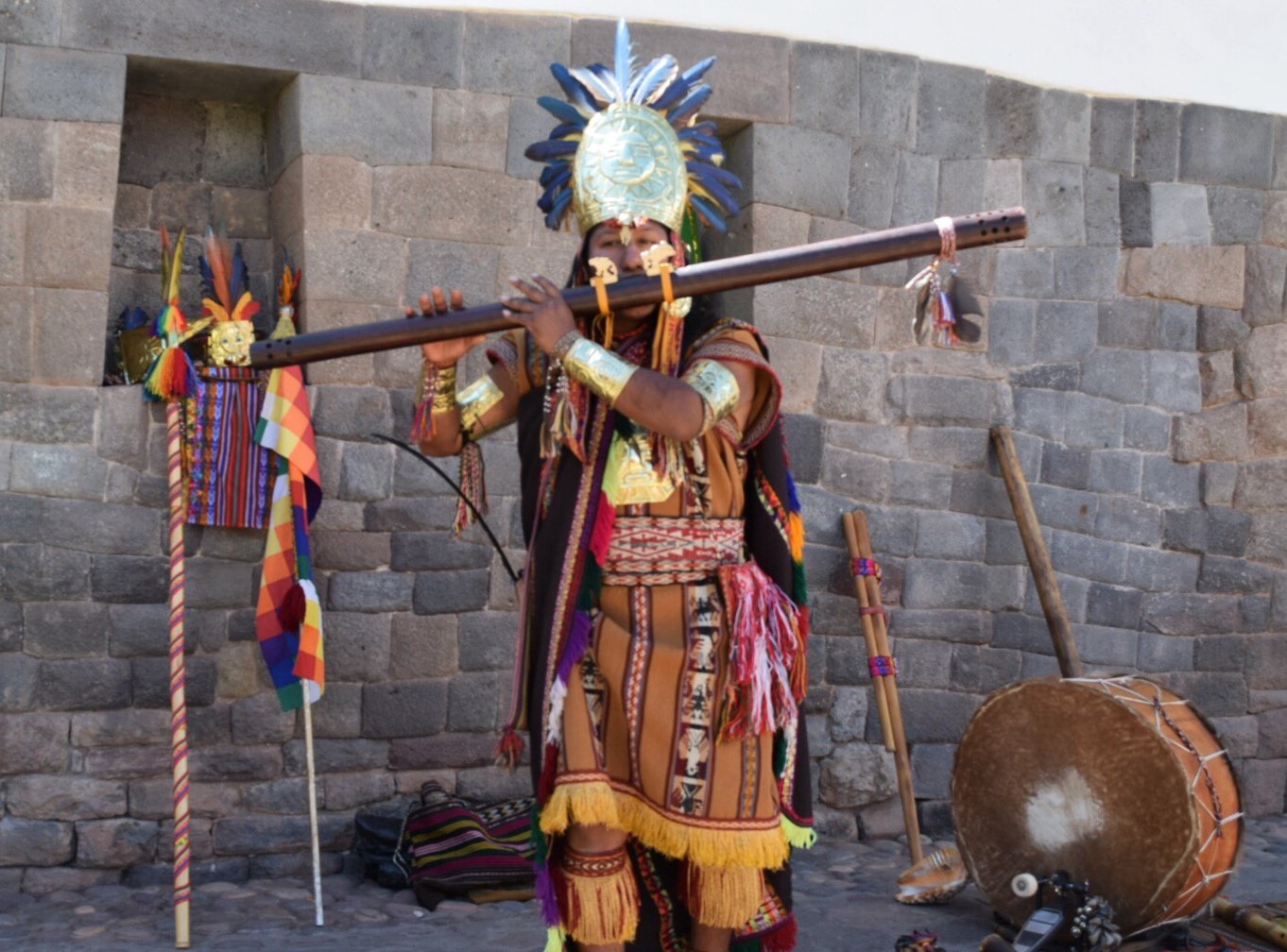 I’m a huge fan of both history and fun facts, so I’m going to throw out a few interesting tidbits here:

Cusco (also known as Cuzco or Qosqo) was founded in 1100, and just like other famous historical cities (*cough* *cough* Rome), it has a pretty awesome founding myth. Although this legend doesn’t involve a she-wolf, the theme of brothers seems to be pretty standard. In this case, it was the Ayar brothers that founded Cusco. Ayar Awqa grew wings and flew to the spot where the city was to be built, marking its location by becoming petrified into stone. Therefore, Ayar Manco (Manco Cápac) later found the site his brother had pinpointed and established the city.

Animals play a huge role in the myths and belief systems of the Incas, particularly the condor, puma, and snake (often called the Inca trinity). The condor represented the sky, the puma the earth, and the snake symbolized the underworld. For this reason, Cusco was built in the shape of a puma. Major sites of the city formed different body parts of the Puma, with the Plaza de Armas forming the area between its legs. 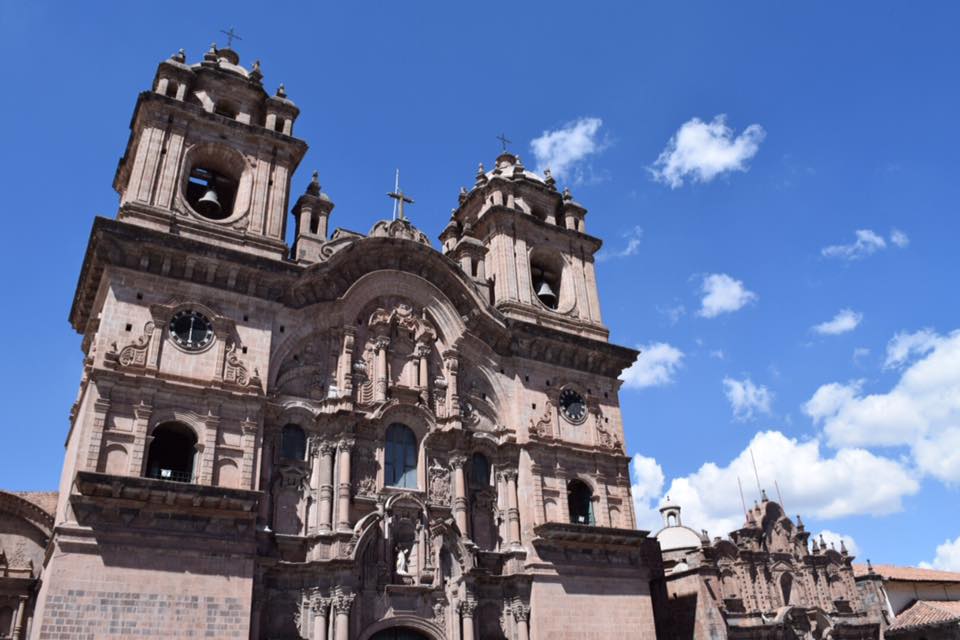 The most popular area of Cusco surrounds the Plaza de Armas, the square that typically formed the center of most Spanish cities. Standing in this plaza, you can see various cathedrals and other examples of the gorgeous blend of Spanish and Inca architecture.

As you may or may not know, the Incas are quite famous for their construction methods. They were able to cut stone and build without ever having to use cement. A visit to Cusco would be incomplete without seeing a real-life example of this method: the twelve angle stone, located on Hatun Rumiyoc street. 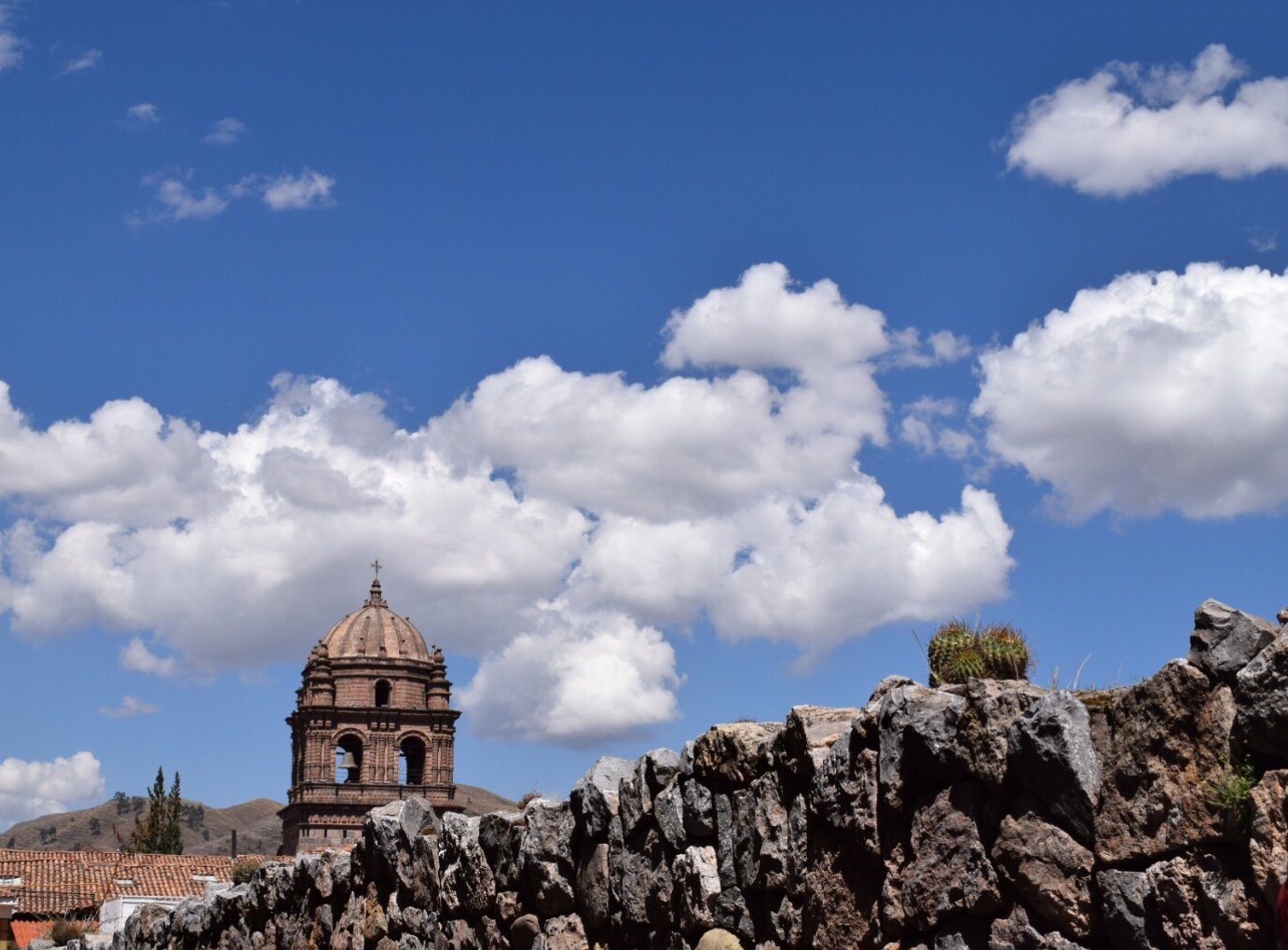 My favorite thing to do was tour the different churches and cathedrals. Although you are not permitted to take pictures inside of these buildings, I think that they are an exciting example of the Catholic church’s arrival in South America. Many cathedrals have hidden references to indigenous religion, such as the jaguar head carved onto one of the doors of the Cusco cathedral. 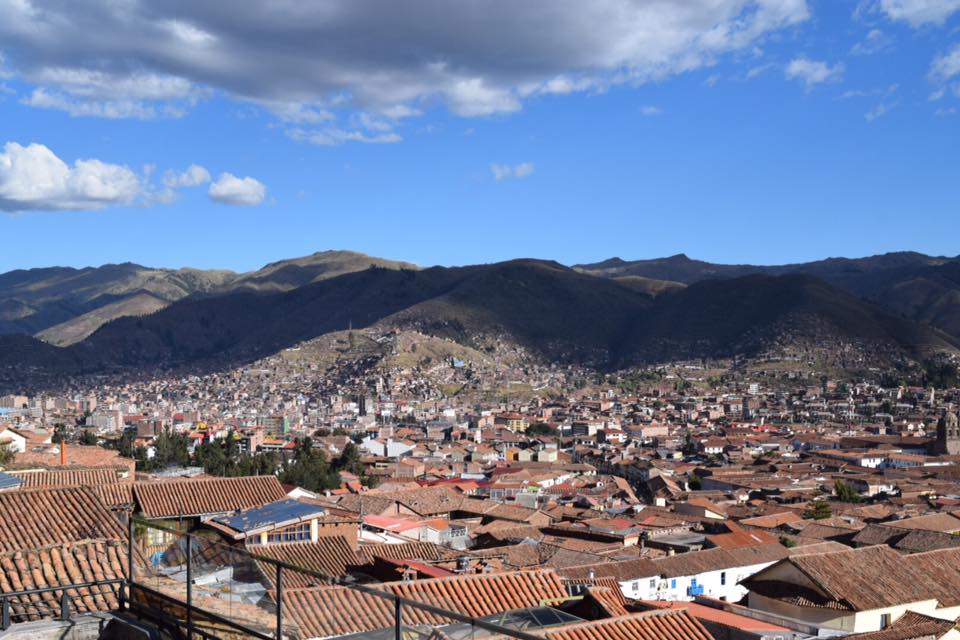 If you’re looking for a breathtaking view of the city, make sure to explore San Blas. You’ll have to climb quite a few staircases to get there, but the picture is worth it. Getting to the beginning of San Blas is an easy four blocks from Plaza de Armas. This area is quite bohemian with an array of different restaurants and artisanal shops.

One of the biggest attractions in Cusco has to be the markets. San Pedro is the biggest market that you will find. If you want to buy alpaca sweaters, magnets, bags, playing cards, hats, etc., this is the place to go. Make sure you try to bargain with the shop owner and don’t always accept the first price!

Cusco is full of restaurants; however, I noticed that most of the restaurants off the main square tend to serve the same kind of food. If you’re looking to mix things up, make sure to check out these two places: 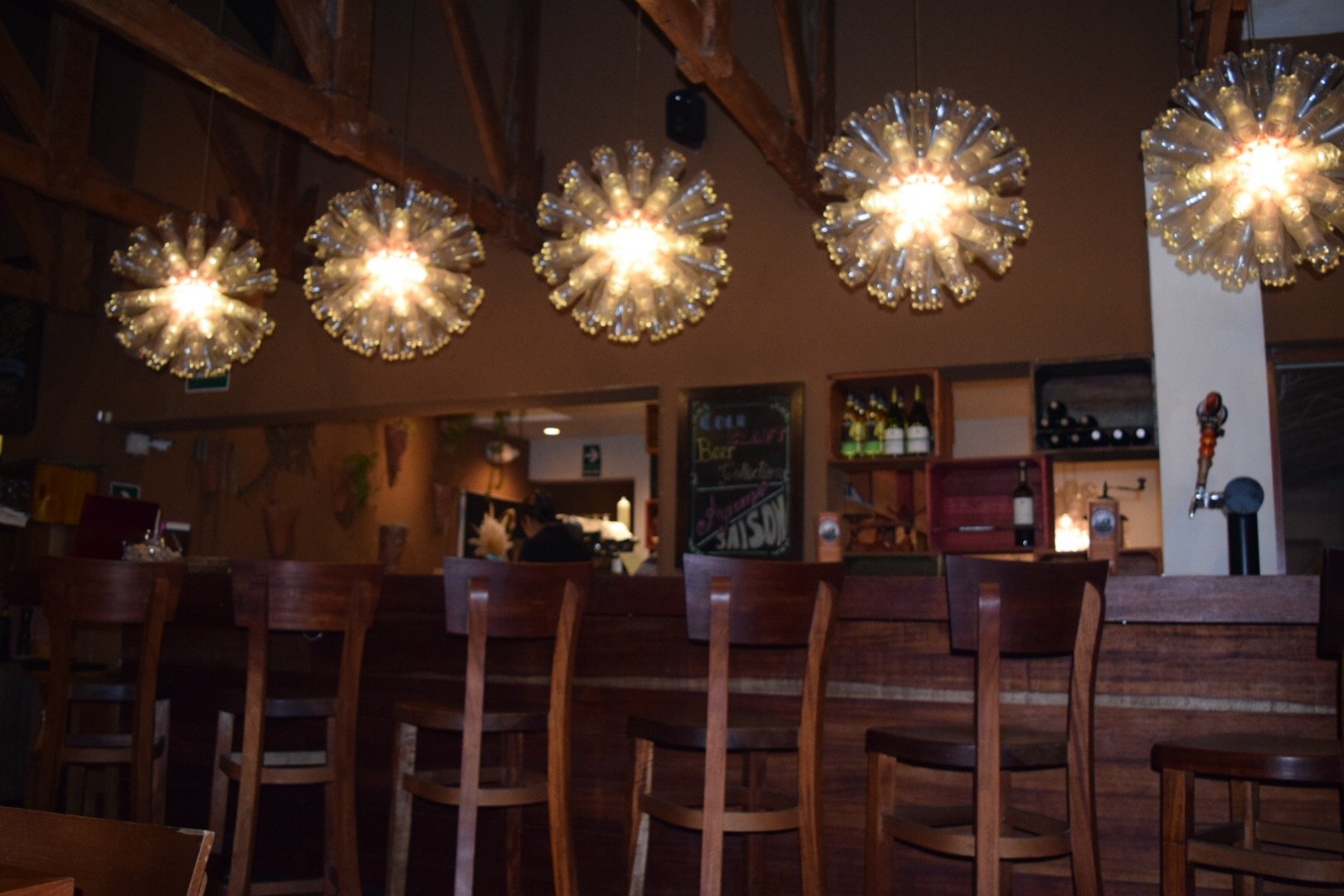 Greens is my absolute favorite place to eat in Cusco. The menu is entirely organic, and the dishes often mix unexpected flavors that culminate into a delicious (and healthy) plate. If you’re looking to try alpaca during your stay in Peru, order the alpaca medallion. My recommendation is the beetroot and sweet potato gnocchi with mango, pineapple, passionfruit, lemongrass, and yogurt smoothie.

The restaurant is easy to find and located just off the corner of Plaza de Armas. While slightly pricer than other restaurants that offer lunch specials, the quality of the food validates the price.

I am not typically the kind of person to eat at a vegan restaurant, but I was pleasantly surprised by Green Point. Tucked into the San Blas neighborhood, Green Point is the only 100% vegan restaurant in Cusco. It was only recently opened (in 2013) and also served breakfast! I recommend the chocolate and banana waffles.

If you’re going to be in Peru, get ready to expand your tastebuds. Peru is distinguished in South America for its cuisine, so make sure to try these traditional dishes:

Ají de Gallina: This is the most classic of all Peruvian dishes. This is a chicken dish that is most often served with white rice. The chicken is mixed with boiled potatoes, a yellow chile pepper, and evaporated milk, making the taste very creamy. Furthermore, a hardboiled egg and olive are placed on the top of the final creation.

Coca leaves: Coca leaves are entirely legal in Peru when it comes to using them in foods, for medicine, or in infusions. If you are feeling sick from the altitude, I highly recommend giving coca tea a try. The leaves have been used for this purpose for hundreds of years. Please keep in mind that you will most likely not be able to bring coca leaves outside of the country. I bought coca candy, a rock candy with coca leaves, to see what the fuss was about. The candy tasted very similar to tea.

Cuy Chactado: Cuy chactado is…deep-fried guinea pig. Although it is one of the more expensive dishes in Cusco restaurants, I think everyone should give it a try at least once. Be aware that the dish is served with the head on.

Ceviche: If you go to Peru and don’t try ceviche, then  you are seriously missing out. Ceviche is fresh raw fish (typically in Cusco, the fish will be trout) blended with lemon juice. Depending on the place you go, you’ll see chili peppers, onions, cilantro, and even sometimes sweet potatoes added as a complement to the mixture.

Divya: Gone With a Whim

Cusco looks so dreamy and what an interesting legend. I had no idea.

My sister in law is from Peru and she is always encouraging me to visit. It's on the list but probably a while off yet. Cusco sounds like an interesting place for a few days and I would love to visit the markets there.

I have always wanted to visit Cusco and this just made me want to go even more! The Incan history is fascinating and I would definitely love to see the twelve angle stone. Also, Greens looks incredible! Definitely on my short list. Thanks for the great guide!

[…] Find out more about what it’s like to travel with this not so average Gringa on Leah’s blog. […]

I think I would alternate between ceviche and dishes like those at Greens the whole time... yummy!