We’ve all heard of Machu Picchu, but how much do you know about this UNESCO World Heritage site? According to historians, not much can be said for sure about this Inca structure, so many theories have existed among scholars since Machu Picchu’s “discovery”. Here are some fun facts about what we know, what we don’t know, and even a few tips to help you make the most of your own trip to this top destination.

That’s right. Yale scholar and adventurer, Hiram Bingham, came across Machu Picchu’s overgrown ruins in 1911. Even after Bingham brought this architectural masterpiece into the light, tourism didn’t start right away. This site was largely forgotten again, even after making a splash in National Geographic.

2. The big mountain you see in pictures? That’s not Machu Picchu.

The gigantic mountain point that is most famous in Machu Picchu pictures is called Huayna Picchu, meaning “young peak” in Quechua. You can climb this peak as well, but only 400 people are allowed up per day, split into two time slots. Machu Picchu itself, meaning “old peak”, is where you are standing when you take this picture! 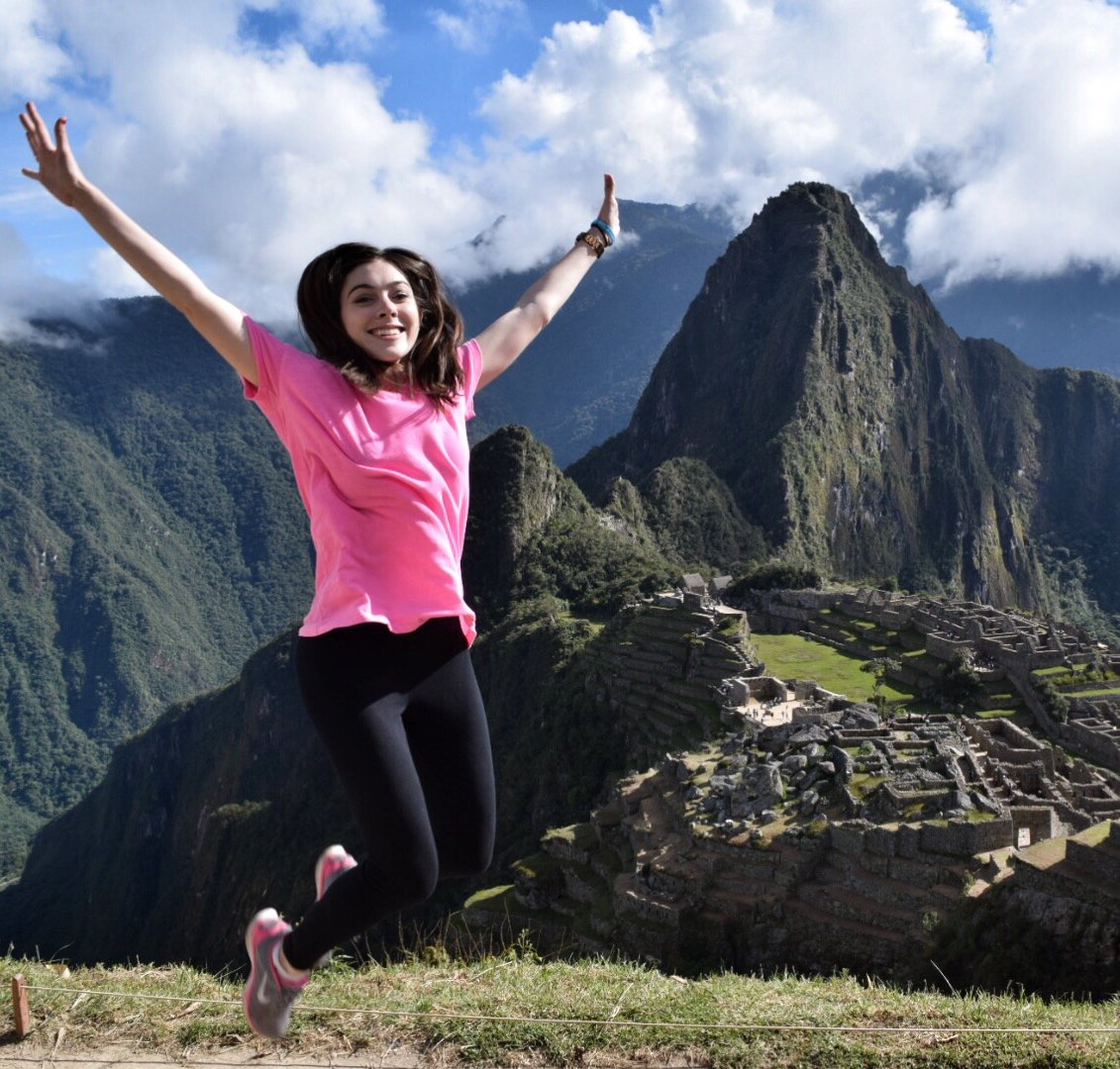 3. It’s not actually the “Lost City of the Incas”.

When Machu Picchu was first “discovered” (notice how I keep putting this word in quotes), Bingham theorized that it was both the founding place of the Incas as well as the last refuge of the Inca empire. The term “Lost City of the Incas” is more accurately applied to Vilcabamba, a city that fell to the Spaniards in 1572 and was later destroyed. Bingham came across Vilcabamba in his travels but didn’t find it to be of much interest.

4. Families were living there when Bingham arrived.

Four families, to be exact. In fact, one of these families’ sons served as the first Machu Picchu guide to Hiram Bingham. Thus, we can’t say that the construction was ever lost at all, just not necessarily known to the public! There have even been lawsuits about the ownership of the land on which the site sits, including the descendants of these families. 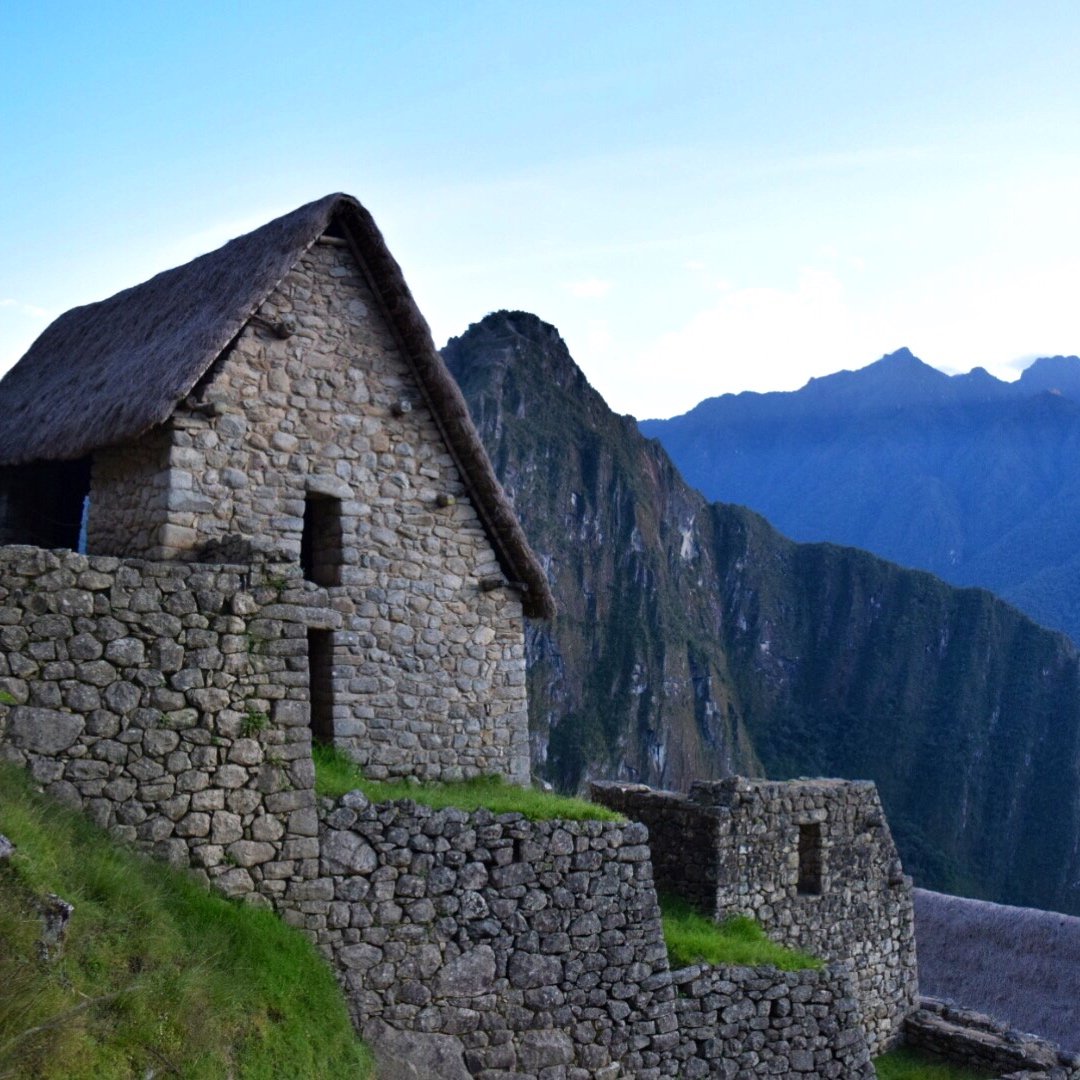 5. The Incas had their own construction method.

If you’ve spent any time in Peru, you’re most likely familiar with the fact that the Incas were able to construct by cutting stones to fit close together without using cement. This tactic, called Ashlar, is perfectly demonstrated at Machu Picchu. We know that this method is pretty useful as many Inca-built structures have survived various earthquakes. Machu Picchu itself was built along two fault lines and is still standing.

6. Many parts of Machu Picchu have astronomical meaning.

The picture below is of the Temple of the Sun, and the rock in the middle of this dome-like structure is believed to have served as an altar. Inca religion is complicated, but we know that it is closely linked to astronomy, and the three main windows were most likely constructed for both religious and agricultural purposes. The sky was particularly relevant to the Incas, including the rise and fall of the sun, the moon, and the stars. For example, one window in the Temple of the Sun lines up with the sunrise during the June solstice. 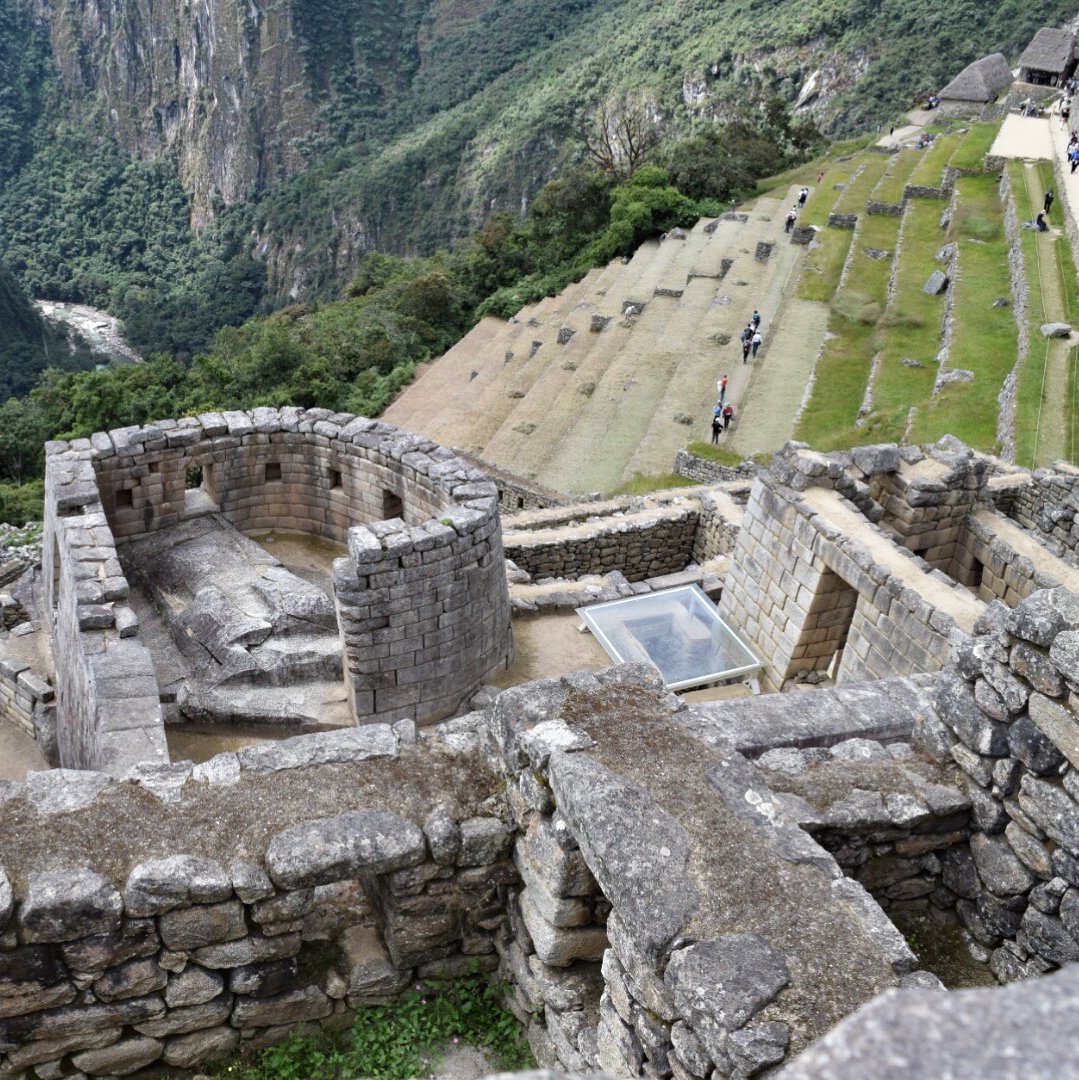 7. We still don’t exactly know what it was.

The academic world has had access to Machu Picchu for over a century, yet we still can’t say without a shadow of a doubt what exactly it was. When first discovered, Bingham theorized that it was the last fortress of the Incas. Test results showed that remains found on the premises were mostly female, leading experts to believe that these could be “Sacred Virgins of the Sun”, women who were trained to work in a temple. Later on, this was refuted as the skeletons were unearthed, re-examined, and found to be 50% male/50% female. Most scholars now agree that it was some estate built for Pachacuti (also known as the “Earth Shaker”), the ninth Sapa Inca. Others suggest that it is nearly impossible to understand Machu Picchu as a separate entity and that by connecting it with other sections of the Inca Trail, this could have been some form of pilgrimage.

8. The best time to visit is early in the morning.

I know this to be true from experience. I arrived at Machu Picchu a little before 7 am after hiking the hour and 45-minute trail from Aguas Calientes to the entrance. When I first walked onto the premises, maybe only two hundred other people were there with me, and almost no one had begun to spread out from the first viewing point. This was perfect for pictures! I was able to photograph without any pesky photo bombers. 12-3 are the peak times for tourists. People who come in the afternoon are most likely squeezing in a quick day trip to the site from Cusco. I do not recommend this route; instead, spend the evening in Aguas Calientes and get up early. This way, you avoid the majority of other tourists.

9. The number of tourists per day is limited.

Buy your tickets ahead of time! New regulations were instated in 2011, restricting the number of tourists allowed on the site at a time to 2,500. If you want to climb Machu Picchu mountain or Huayna Picchu, this is even further limited. When buying your ticket, you must choose a time slot at which you will enter to begin climbing these two attractions. You can see how many tickets are left per day by checking the top left corner of the website after selecting a day to visit (see photo below). 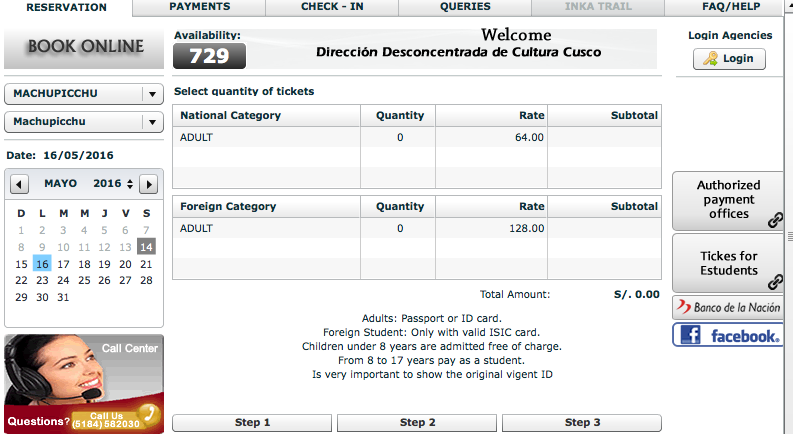 10. You can get a Machu Picchu stamp on your passport!

I was very excited about this part and had seen how amazing it looked from Audrey. After entering at 7 am, I was running around desperately trying to find where to get this stamp, and it turns out that they don’t put the stamp out until 9 am. After handing your ticket over to be scanned, turn to your left. There will be a wooden table with the stamps and ink laying out on it. I had been expecting someone to give me the stamp, like at the airport, but nope! You do it yourself. This is awesome because you can place it exactly where you want it to be. 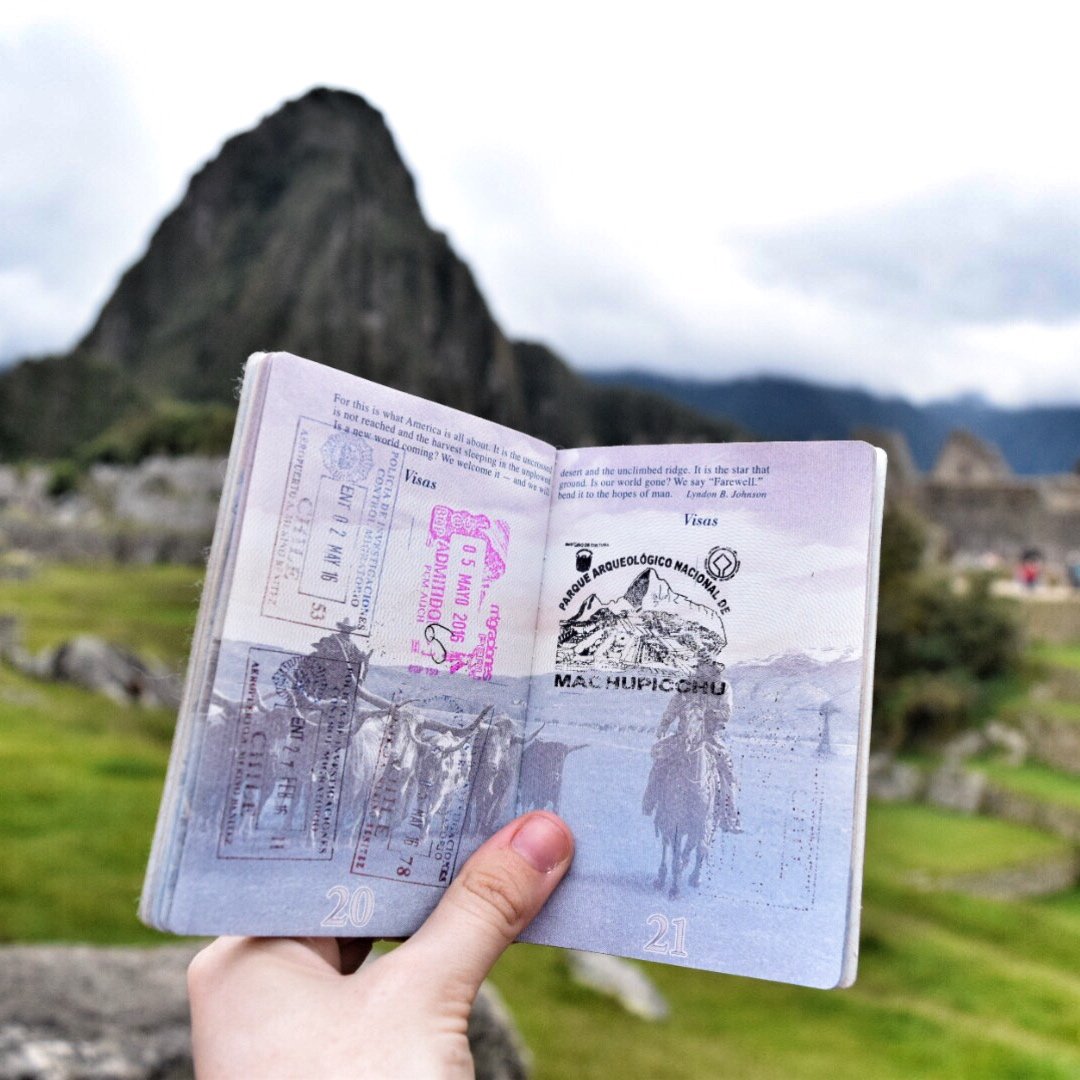 I enjoyed reading this book so much, and I think most of it has to be due to the way that Mark Adams’ sarcasm mixes with his style of journalism. In this book, Adams presents the story of Hiram Bingham, who I’ve mentioned quite a few times, as well as his own story of hiking the trails surrounding Machu Picchu and subsequent journey of piecing together the details about what we know and don’t know about this historic site. If you are planning a trip to Machu Picchu, I definitely recommend reading this book beforehand to understand best what you are observing when you go.

Check out my favorite Peru guidebooks below! 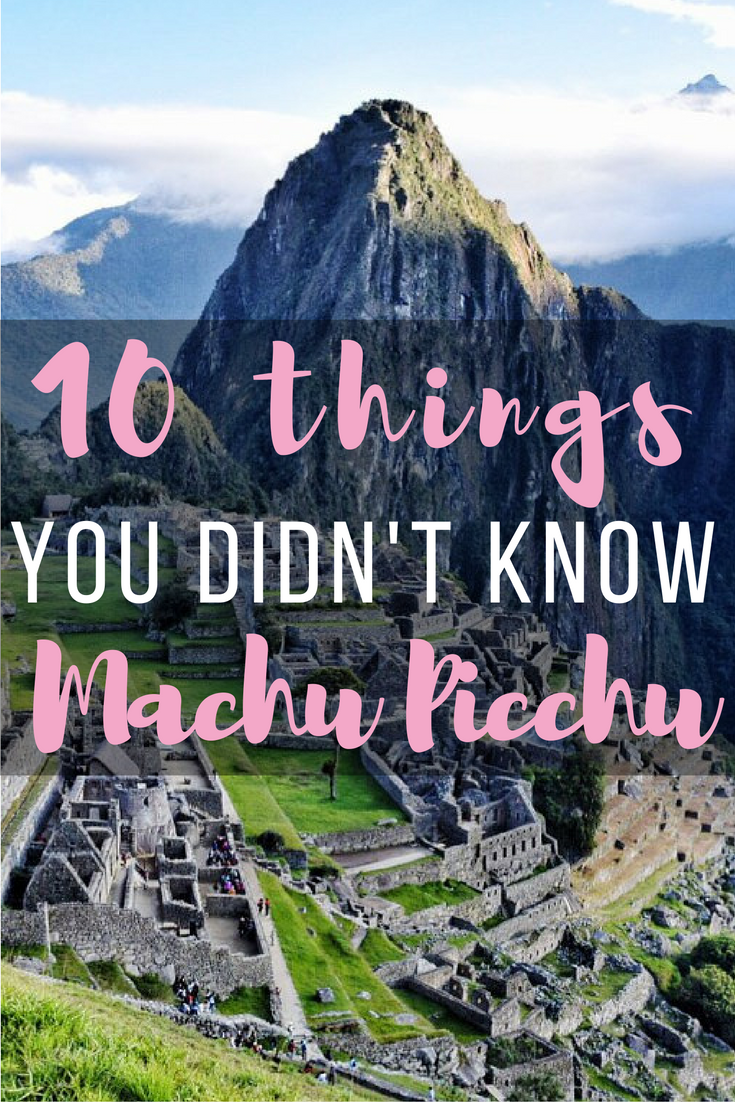 WHEN IS THE BEST TIME TO VISIT PERU? - Gringa Journeys

MY FAVORITE PLACES OF 2016 - Gringa Journeys

[…] Machu Picchu isn’t on your bucket list, then it should be. While this is one of those destinations that […]

The ancient sacred site of Machu Picchu is really captivating. One of the "must visit" destination for every person that are earger to go on a spiritual journey.

There's also a 2003 edition of 'Lost city of the Incas' - Hiram Bingham's own account of his journey and discovery which is a really interesting read!