The 5 Best Alsace Villages to Visit

If you’ve ever seen a picture of a fairytale village in France, this was probably taken in the Alsace region. Due to a mix of both French and German influences in this area, you’ll find unique architecture here that you won’t find anywhere else in France. The perfect part about Alsace is that you can visit year-round. With big attractions such as the Alsace wine route and adorable Christmas markets, you’ll always be able to find something to do here. Nonetheless, due to the sheer amount of villages in the Alsace Region, planning a trip can be a little confusing! The primary purpose of this article is to introduce you to the top five best Alsace villages to visit. However, I’ll also be providing other useful information on traveling in this area of France. After reading, you should have the tools to plan your trip without a hitch!

Colmar, often called the “capital of Alsatian wine”, is the largest of the five villages that I’ll be mentioning. Furthermore, this town has been an important cultural center since the 13th century. The well-preserved timbered houses and Little Venice canal make this village feel like it’s straight out of a storybook. To best discover Colmar, you’ll want to spend at least a few hours here. You won’t want to miss the most popular things to do in Colmar, such as Little Venice, the Colmar Cathedral, and the Covered Market Hall. For the most colorful homes in the village, you’ll want to head to the fishmonger’s district. Interestingly enough, although this area may not have the prettiest name, it indeed contains the most beautiful gems in Colmar. For history lovers, make sure to spend some time at the Musée d’Unterlinden, the most visited museum in Alsace. If you’d rather explore Colmar in a group, check out the tour options offered by the Colmar Tourist Office.

As you’ll be located in the Alsace Wine Region, don’t forget to sample some of the local wine! I recommend going to Le Cercle des Aromes wine bar for a tasting. This venue also serves ham and cheese platters if you’d like a little snack with your wine. After this, if you’re ready to try some authentic Alsatian cuisine, stop by Restaurant La Soi for an excellent Tarte Flambée. 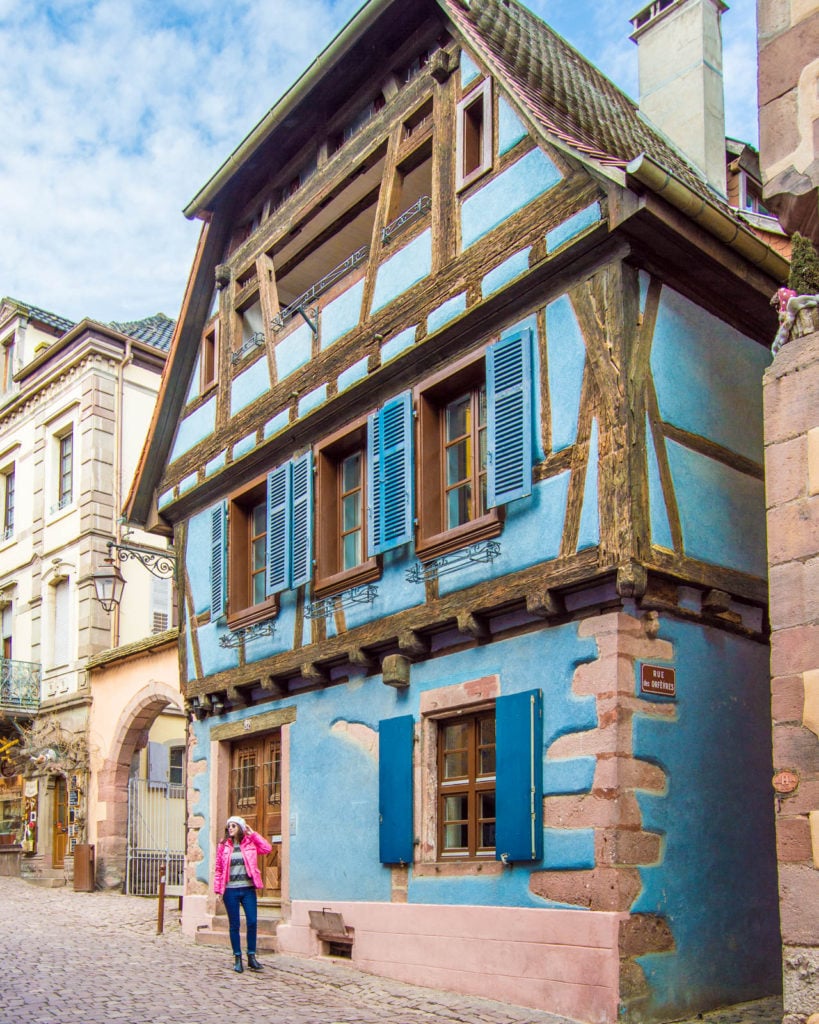 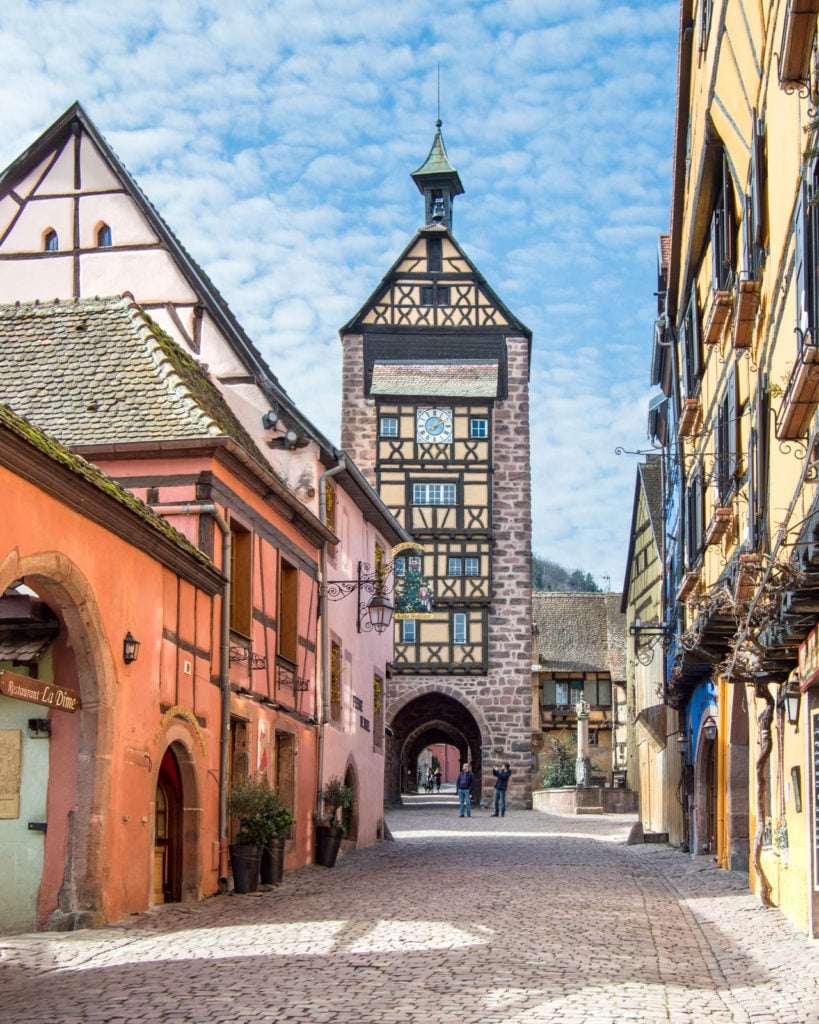 Tucked between the Vosges mountains and some fantastic vineyards, you’ll find the charming medieval village of Riquewihr. In fact, out of all the places mentioned in this list, Riquewihr and Eguisheim are on the official list of Les Plus Beaux Villages de France (“the most beautiful villages in France). As you explore Riquewihr, you’ll be able to see precisely why this adorable town inspired Disney creators. You may even notice that it looks a little like Belle’s home in the classic film, Beauty and the Beast!

Even if you don’t have a chance to visit Riquewihr during the holidays for its famous Christmas market, you can still find a little piece of Christmas here no matter the month! One of my favorite things to do is to go to the Féerie de Noël Christmas store. This multi-level shop is decorated from top to bottom in every type of holiday decor! Plus, an ornament always makes a great souvenir to bring home. To find some of the most striking buildings in Riquewihr, take a stroll down the main road of Rue du General de Gaulle. Once you feel you’ve explored enough, make sure to stop by Crêperie du Vieux Pressoir for delicious crêpes on your way out! 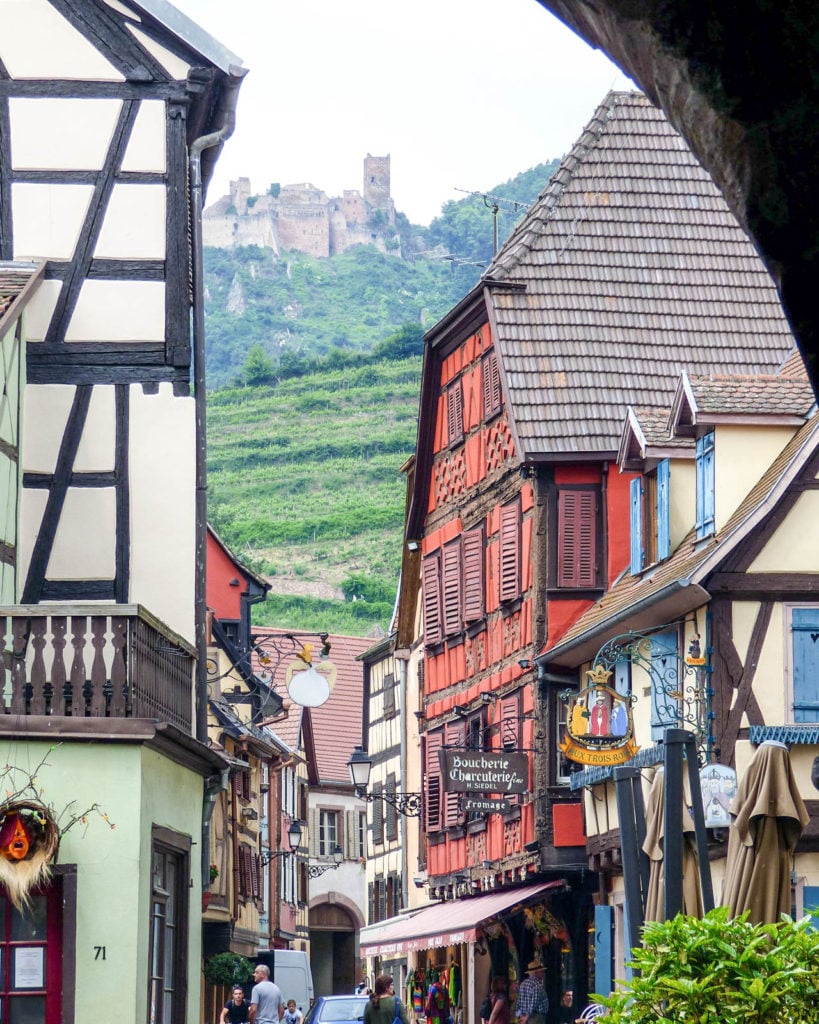 Image by Eric Michelat from Pixabay 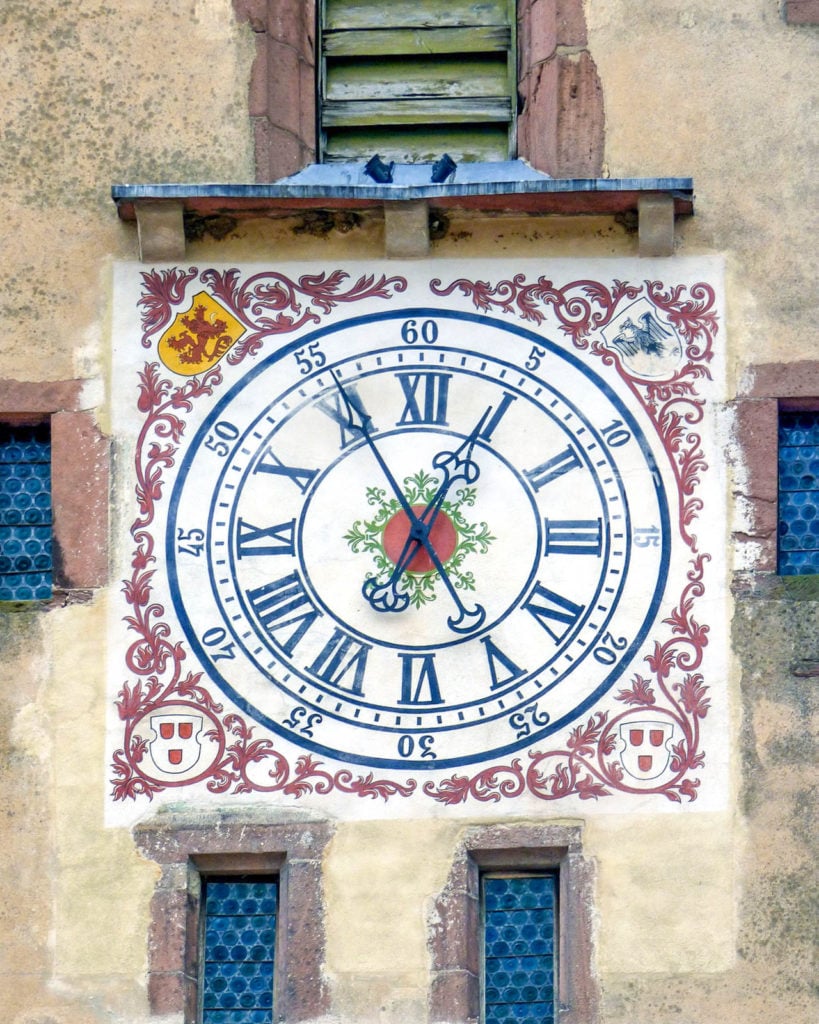 Image by Eric Michelat from Pixabay

Riquewihr and Ribeauvillé are neighboring villages, making it simple to see both in one trip! If you’re traveling by car, the drive will take less than 10 minutes. Ribeauvillé is partly surrounded by medieval walls, which were built in the 13th century as fortifications. From this picturesque town, you can visit the ruins of three castles via a hiking path. These include Saint Ulrich castle, Girsberg castle, and Haut-Ribeaupierre castle, which were all constructed by the Lords of Ribeaupierre during the Middle Ages. For a walking tour of the village, take a stroll down Le Grand Rue (Main Street) to see the main sights.

For wine lovers, you’ll want to go by the Cave de Ribeauvillé. This spot undoubtedly offers the most authentic wine tasting experience in the area! The Cave de Ribeauvillé was founded in 1885 as a winegrowers’ cooperative. Since then, it has continued the tradition of harvesting and producing the seven grape varieties grown in Alsace. If you’d like to visit Ribeauvillé during a particularly exciting time of year, plan your trip during the Fiddler’s Festival in September or the Christmas markets in December.

Image by Macyvi from Pixabay

Apart from being voted the Village préféré des Français (Favorite French Village) in 2013, Eguisheim has also won various awards for its flowers. With a population of approximately 1,700 people, a trip to Eguisheim is certainly relaxing. As you take your time exploring the narrow streets and quirky shops, don’t miss the main square with a beautiful fountain, the Château des Comtes d’Eguisheim (castle), and the tiny yet alluring Chapelle Saint-Leon IX. For a fabulous and authentic Alsatian meal, take a break from your wandering to eat at Au Vieux Porche or the Auberge Alsacienne (hotel with a restaurant).

If you happen to be visiting Eguisheim during the last weekend in August, you’re in for a treat! The village comes alive with the Vignerons Festival of Eguisheim, the oldest Alsatian wine festival. This event involves open cellars for wine tastings, an orchestra performance, and a huge parade. Like many of the other Alsace villages, Eguisheim also puts on a lovely traditional Christmas market each year. During this season, you’ll be able to see the timbered houses fully decorated for the holidays and covered in beautiful Christmas lights.

Image by Ben Kerckx from Pixabay

Kaysersberg is another fairytale village that you won’t want to miss on your vacation to Alsace. Its name means “emperor’s mountain” in German and sits between Riquewihr and Colmar. Kaysersberg was part of Germany between the Franco-Prussian War and the First World War, totaling 48 years. As you make your way through the town, you’ll notice a bridge from the 16th century that offers a stunning view of the Weiss River. In the distance, you might even catch a glimpse of the Château de Kaysersberg, a castle in ruins. Another historical attraction in Kaysersberg is the Eglise De l’Invention De La Sainte-Croix, an impressive and quaint church. For a high-end dining experience during your time in Kaysersberg, check out L’alchemille or La Table d’Olivier Nasti (both are Michelin restaurants).

Remember that with all of these Alsace villages, December is a great time to visit to get into the Christmas spirit. Kaysersberg also celebrates with a Christmas market and plenty of decorations. To partake in the market like a true Alsatian, make sure to try a bredele Christmas cookie paired with a hot chocolate or mulled wine!

What is the Alsace wine route?

The Alsace wine route is a designated section of the Alsace that passes through the best wine-producing towns in the region. The entire course, from top to bottom, spans approximately 106 miles (170 km). This wine route is a trendy trip to take in France as the entire stretch looks like something out of a painting. Between the flourishing vineyards and the fairytale villages that you pass through on this drive, the Alsace wine route should be on everyone’s bucket lists. Even if you’re not a massive fan of wine, you’ll still find Alsace to be enchanting.

If you don’t mind braving the cold weather, the best time of year to visit Alsace would be during December. This way, you’ll have the chance to witness the Alsace villages in all their Christmas glory. Although the Christmas markets make the Alsace region a big attraction during the winter, I still recommend visiting, even though you’ll deal with many other tourists. If you’d prefer warmer weather but fewer crowds, consider visiting during the fall. During this season, you’ll be able to see harvest season in the vineyards. So, you’ll see all sorts of autumnal colors throughout the fields!

If you’re not particularly interested in visiting the Christmas markets, I suggest visiting sometime between May and October. Just keep in mind that the busiest months are June, July, and August. If you’d like to skip peak season, the best time to visit Alsace is probably in May, September, or October. Nonetheless, due to the region’s mild climate, there’s never really a wrong time to visit.

How to get to Alsace

Depending on where you’ll be coming from, there are many different ways to reach the Alsace region. So, let’s go over some of the main options. No matter where you’re located, the great news is that this region of France is very accessible.

Traveling from the United States to Alsace

If you’re planning to fly from the United States, the best option is to fly into the Charles de Gaulle Airport in Paris and then to take a train to Strasbourg from there. This option is hassle-free, as the train station is located inside of the airport. To check train times, you’ll need to visit the SNCF website. The train ride from Paris to Strasbourg should only take about two hours. Since Strasbourg is the largest city in Alsace, it makes for a perfect base from which to visit each of the smaller villages.

From other cities in Europe to Alsace

From most major European cities, you’ll either be able to take a train or fly to the Alsace region. If you choose to travel via train, Alsace has two train stations: one in Strasbourg and the other in Mulhouse. To see which station is best for you, check train prices and times at SNCF.com.

If you prefer to fly to the Alsace region, there are two options for airports: Strasbourg and EuroAirport Basel Mulhouse Freiburg. Flights to Alsace are available for many of the bigger cities in Europe, including Amsterdam, Berlin, London, Rome, Barcelona, and Madrid.

From Germany and Switzerland

Since the Alsace region is so close to and shares borders with Germany and Switzerland, you may want to consider renting a car for your journey. This option offers a lot more flexibility as well to stop and see as many Alsace villages as you would like. Therefore, you won’t have to be dependent on buses, taxis, or bicycles to explore the region. 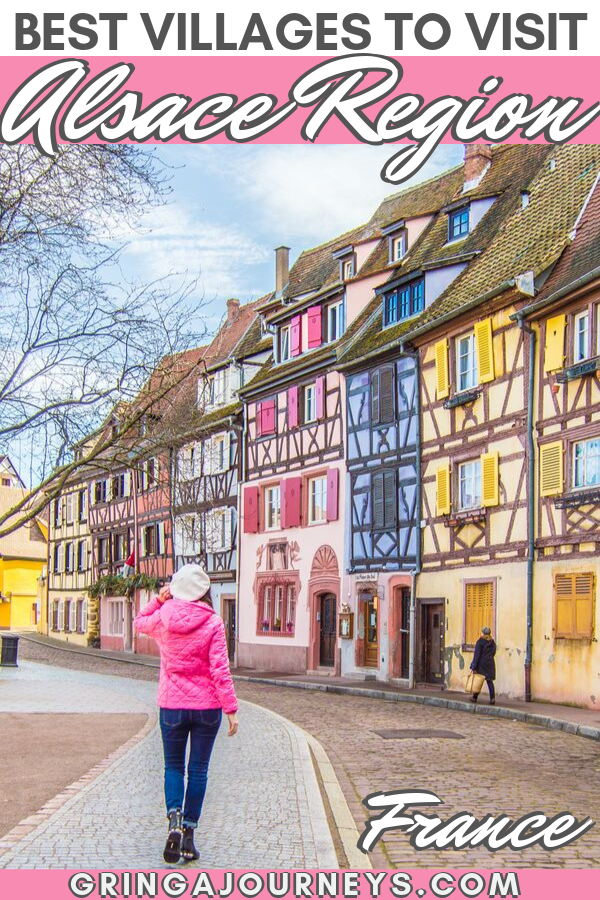 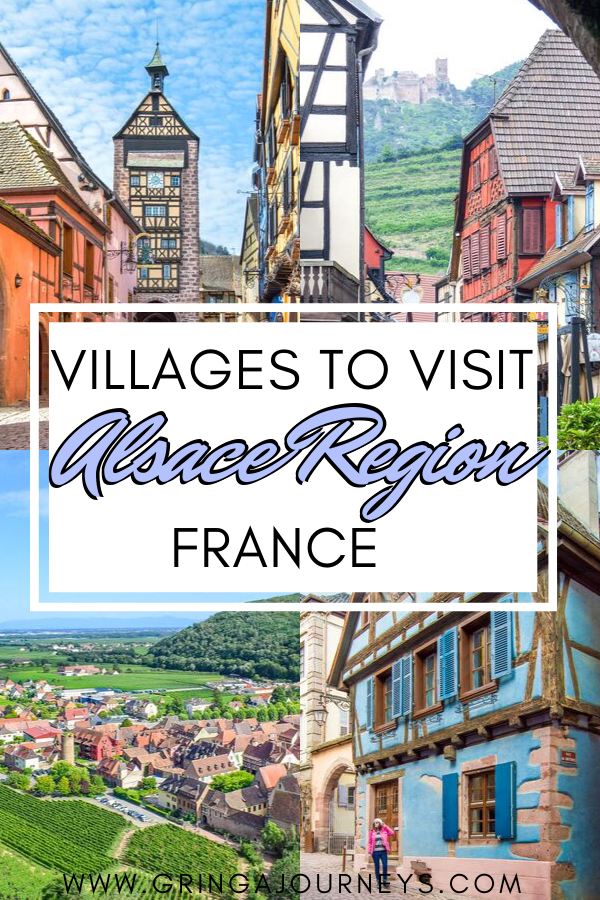 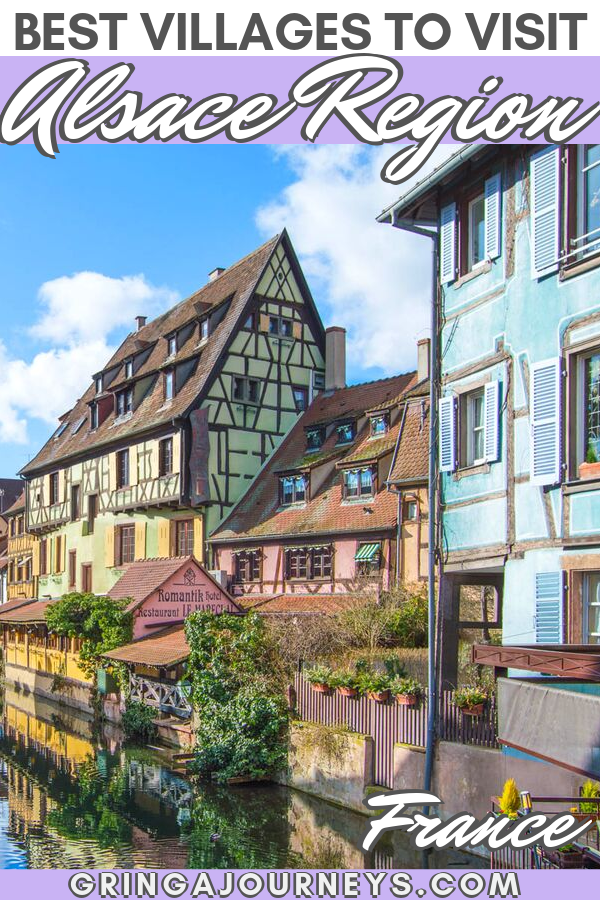 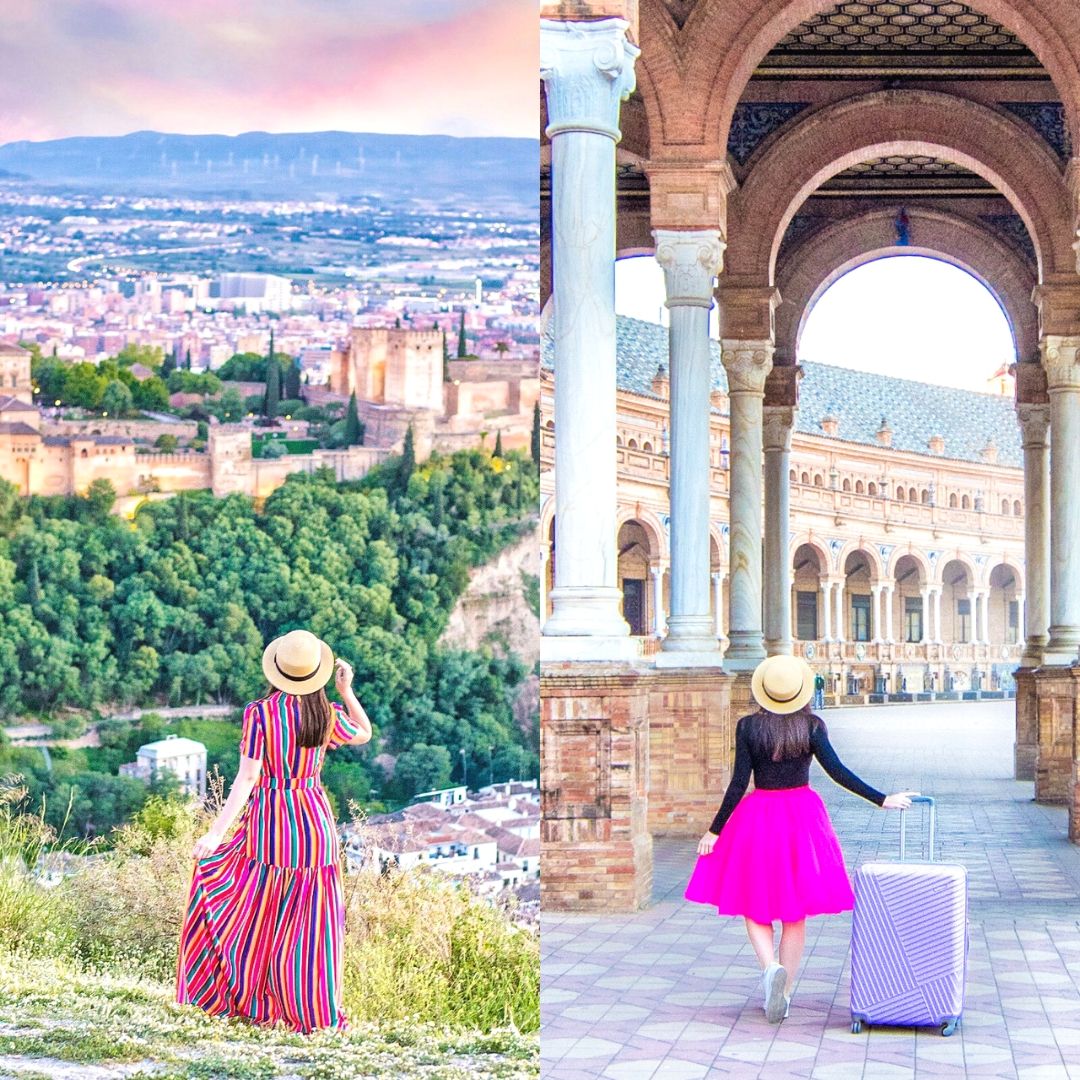 Granada or Seville: Which City Should You Visit? (Pros & Cons of Each!)
← Read Last Post 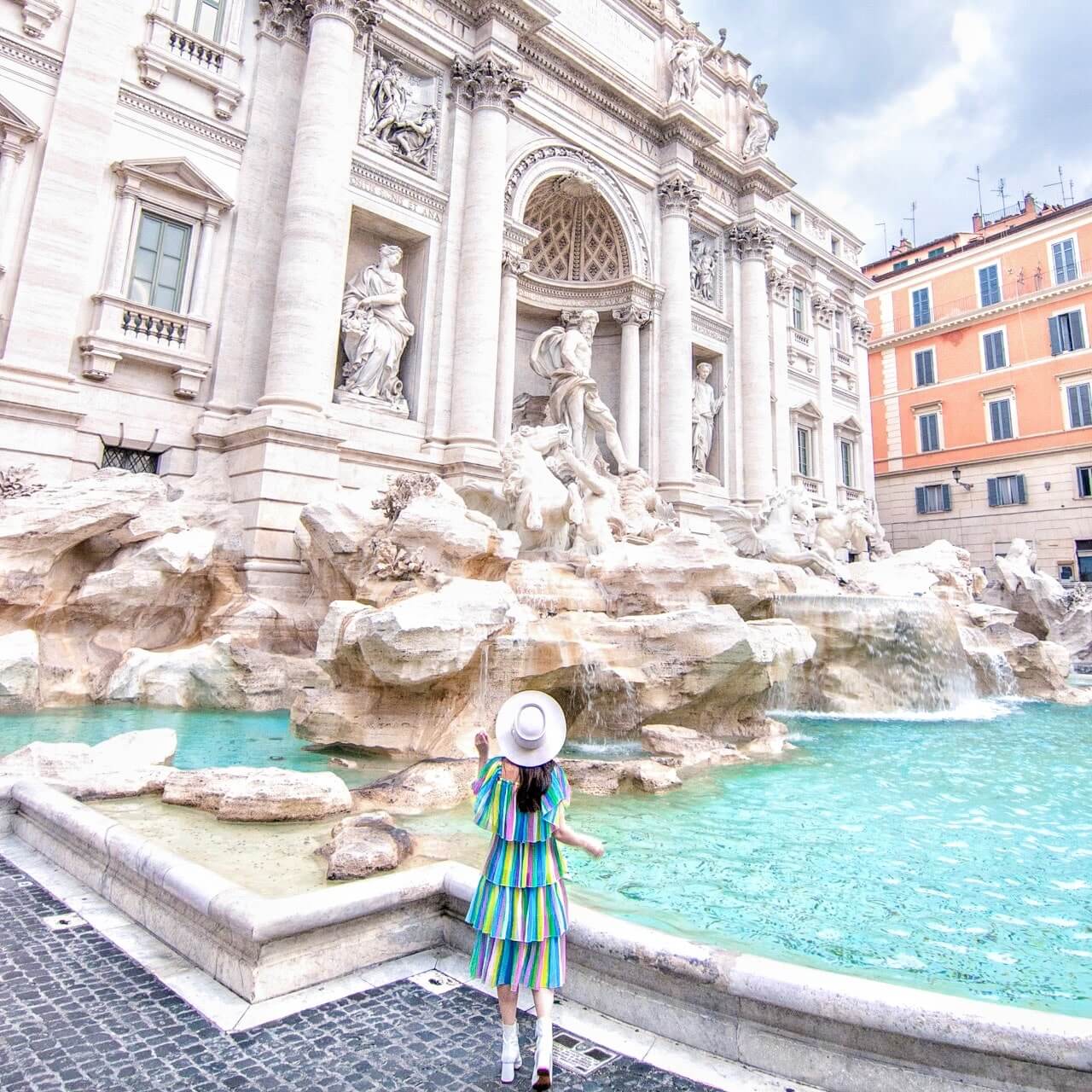 Rome in 2 Days: What to Do, See, Eat, and Drink in 48 Hours
Read Next Post →
Click here to cancel reply.

WHAT TO DO IN MONTMARTRE DISTRICT, PARIS

HOW TO SPEND ONE DAY IN STRASBOURG, FRANCE

Thank you for letting me know! I'll look into this ASAP!

These are BEAUTIFUL places! I want my husband to get stationed in Europe and I hope to visit these villages with my family. Thanks for the awesome recommendations!

My name is Leah, a 29-year-old who believes you can never be too well traveled or too educated. That’s why I’ve devoted myself to sharing my passion of travel with others. I work full-time as a travel content creator and hope you’ll enjoy following along with my adventures!