Looking for an easy day trip to do from Rome? My favorite option is undoubtedly Pompeii, an exciting archeological site near the Bay of Naples. Although you may be familiar with the story of this ancient Roman city, seeing its preserved ruins in person is truly a novel experience.

Even if you don’t usually enjoy historical sites, Pompeii is still 100% worth the visit. After all, how many chances do you have in life to see a city from 79 A.D.? In this post, I’ll be explaining why you’ll want to visit Pompeii during your vacation to Italy. Moreover, we’ll go over how you can easily see both Pompeii and Mount Vesuvius on a day trip from Rome with Dark Rome.

What happened to Pompeii? 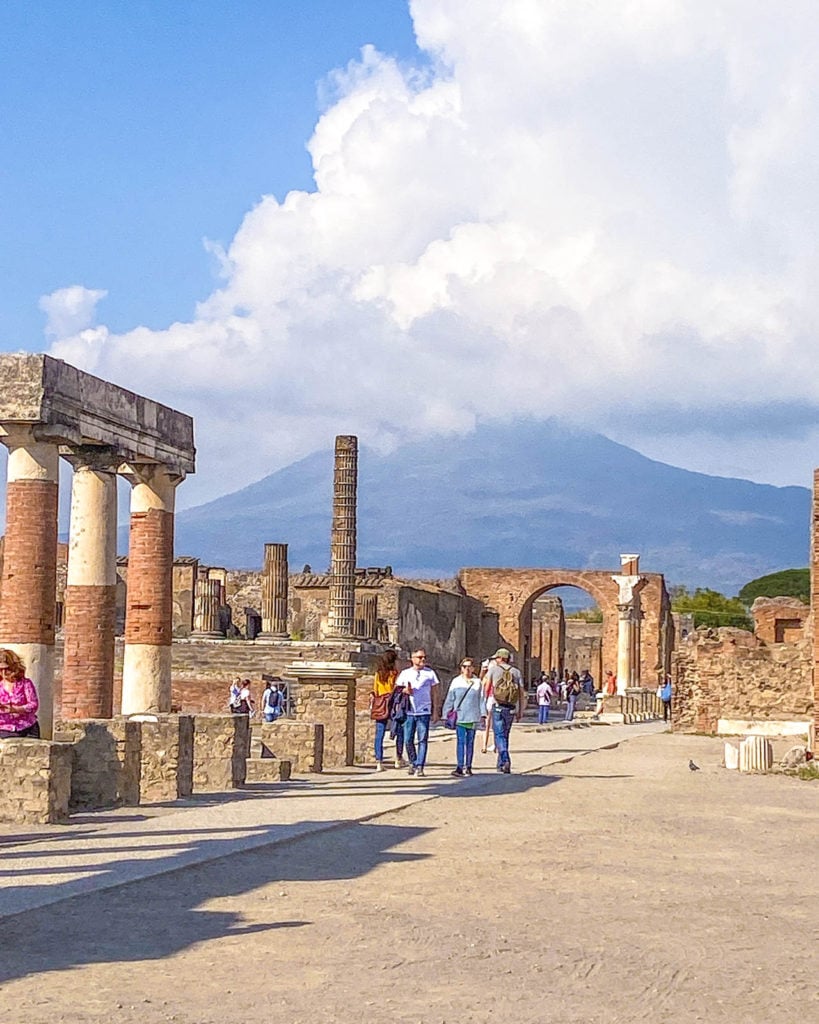 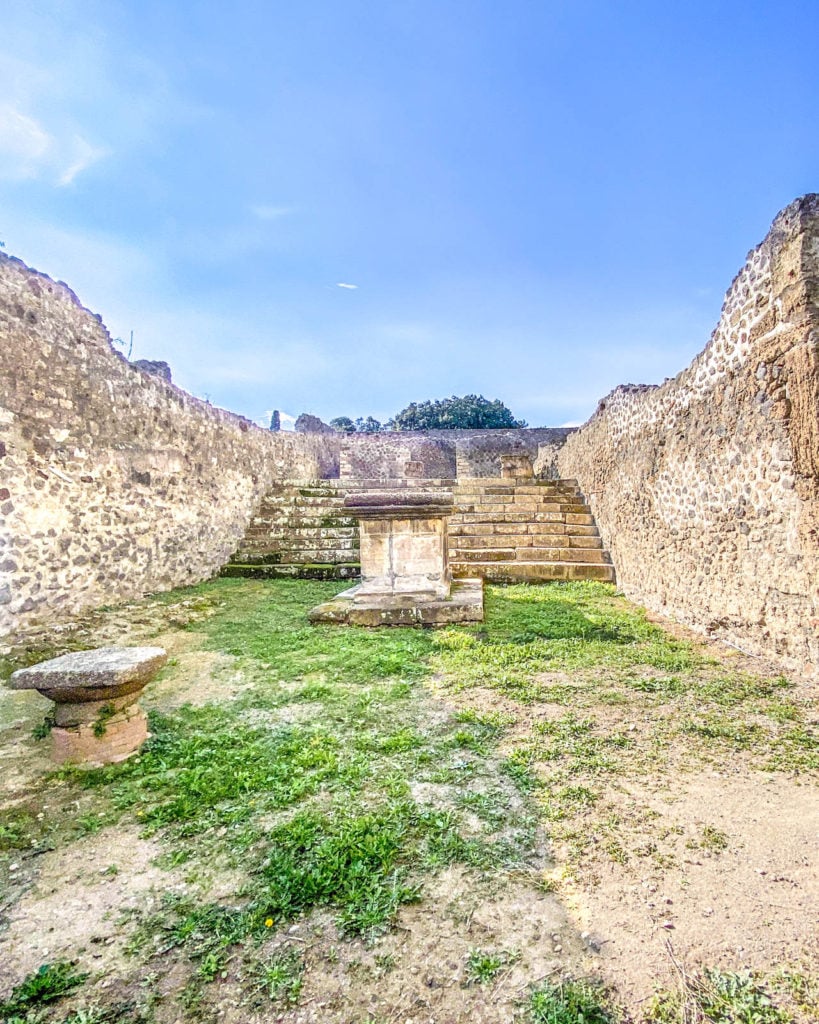 The Roman town of Pompeii, in 79 A.D., was a bustling center of activity with approximately 12,000 inhabitants. However, the Pompeians had unknowingly constructed their homes within dangerous proximity to a volcano. The town sits so close to Mount Vesuvius that you can make out the volcano in the distance from Pompeii’s main square.

During a summer morning in 79 A.D., Mt. Vesuvius had its most famous and lethal eruption. Afterward, as debris began to fall to the ground, some Pompeii residents had time to flee.

Nonetheless, many stayed, not wanting to leave their homes. While the average person may associate this volcanic event with lava, it was actually pyroclastic flow, a type of poisonous gas, that led to the deaths of many Pompeians. By the time the eruption had ended, about 2,000 Pompeii inhabitants had perished along with approximately 14,000 others in the surrounding areas.

Why is Pompeii a big tourist attraction? 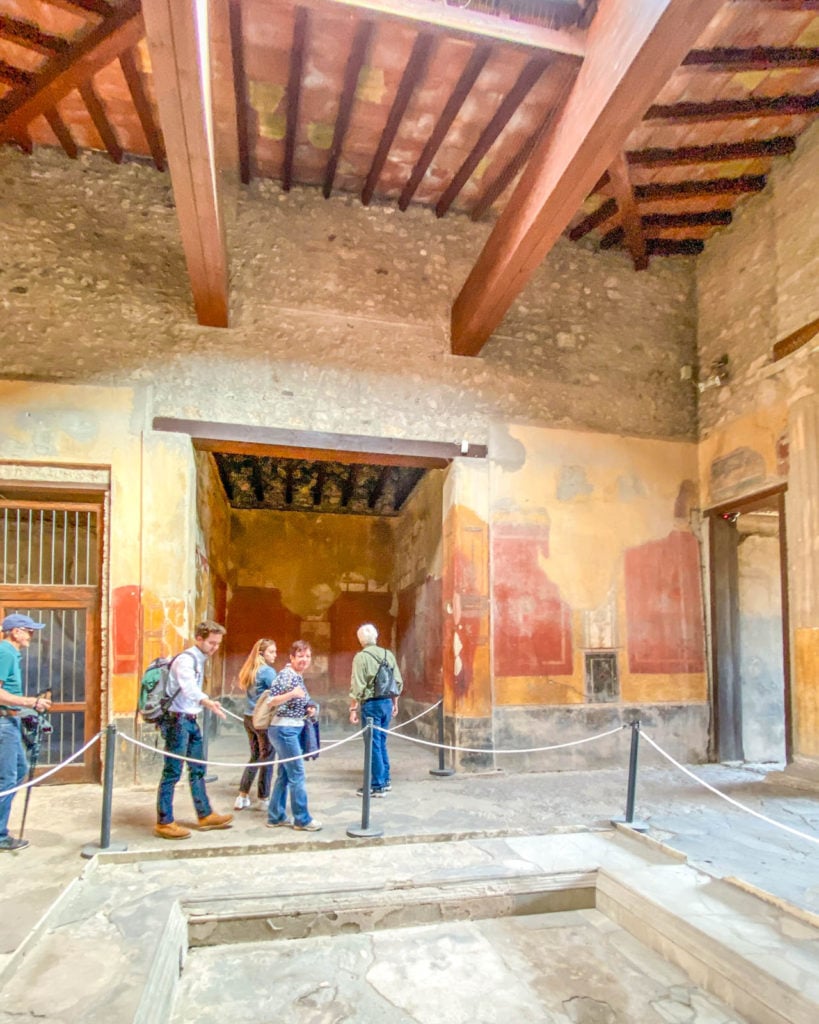 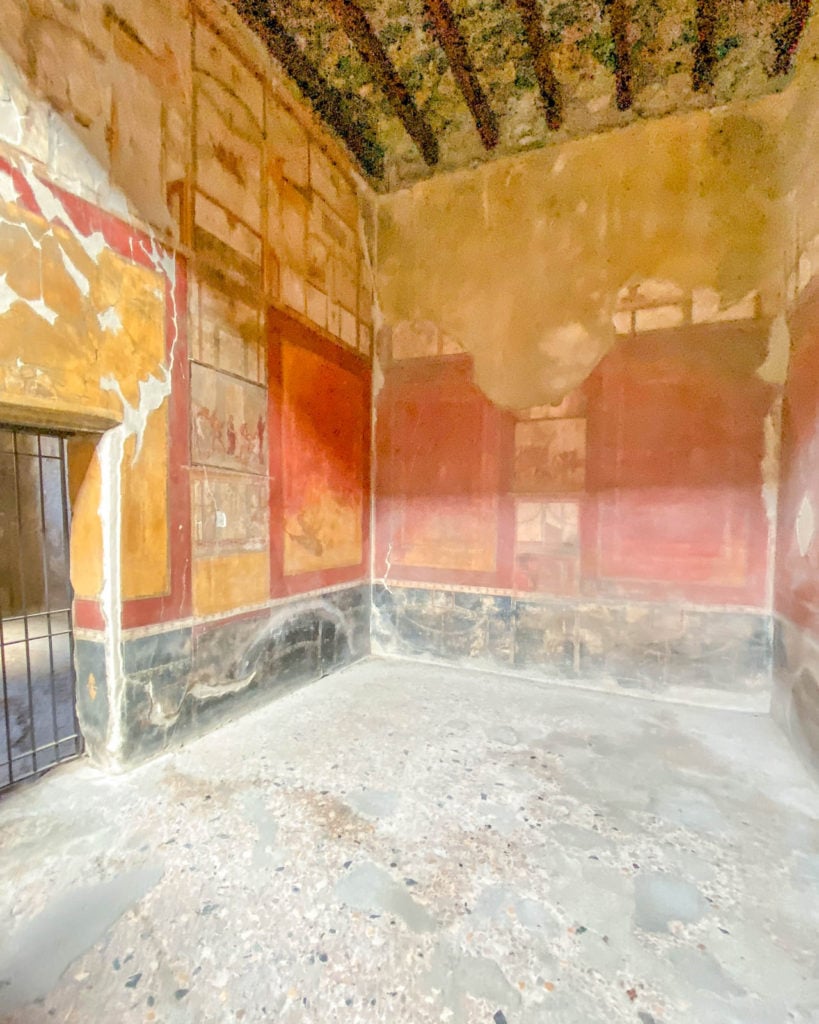 In essence, Pompeii is famous for its preservation. Due to Mount Vesuvius’ eruption, volcanic ash covered the city in its entirety. The town of Pompeii would be lost to the world until excavations in the mid-18th century. At the time of its “rediscovery”, archeologists were surprised to find that the volcanic ash had served as an extremely effective preservative.

Interestingly enough, excavations at Pompeii have continued consistently from 1748 to the present day! So, even if you’ve been to Pompeii before, archeologists may have discovered something new since your last visit. Thus, the main draw to Pompeii is the ability to see so directly into the distant past. By visiting this town, you’re able to see how people lived during the first century, including their homes, businesses, and other critical quotidian sites.

How far is Pompeii from Rome?

Pompeii sits 150 miles (241.8 km) south of Rome, making it the perfect distance for a day trip. Via the high-speed train, you can reach Pompeii from Rome in approximately 2 hours.

When driving or taking a bus, the journey will take closer to 3 hours each way. However, this always depends on traffic! To avoid having to deal with the hassle of renting a car or taking the train on your own, I highly recommend going on a group tour of Pompeii with Dark Rome. 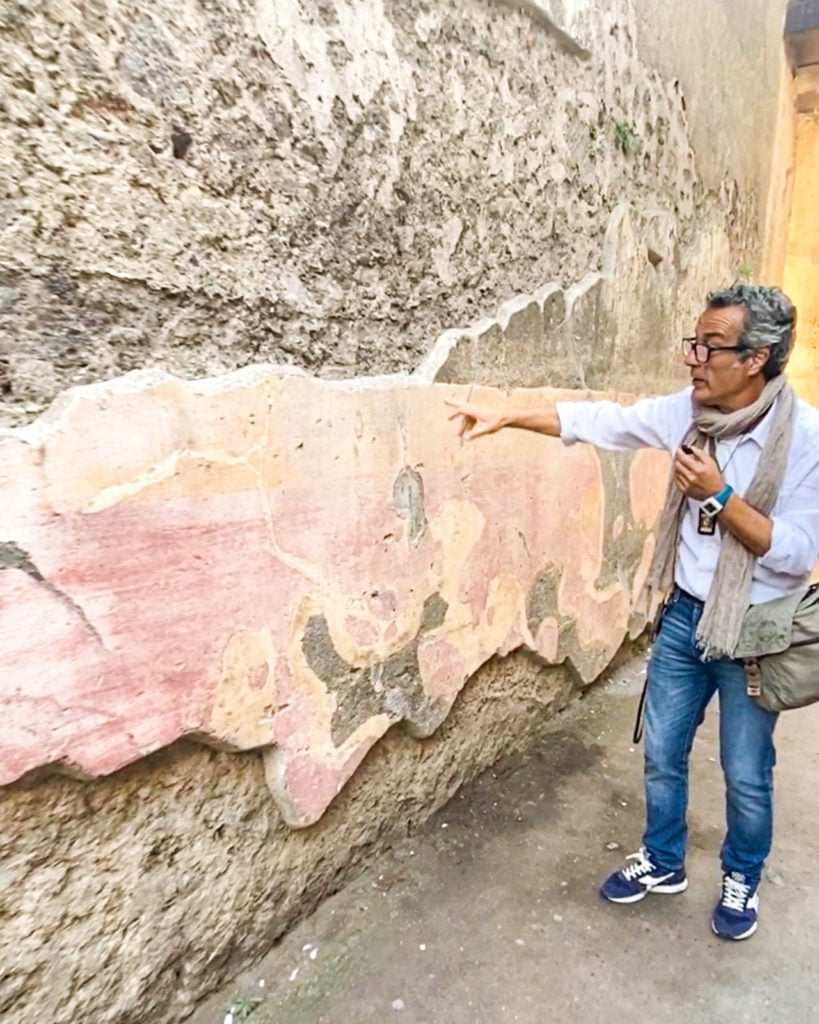 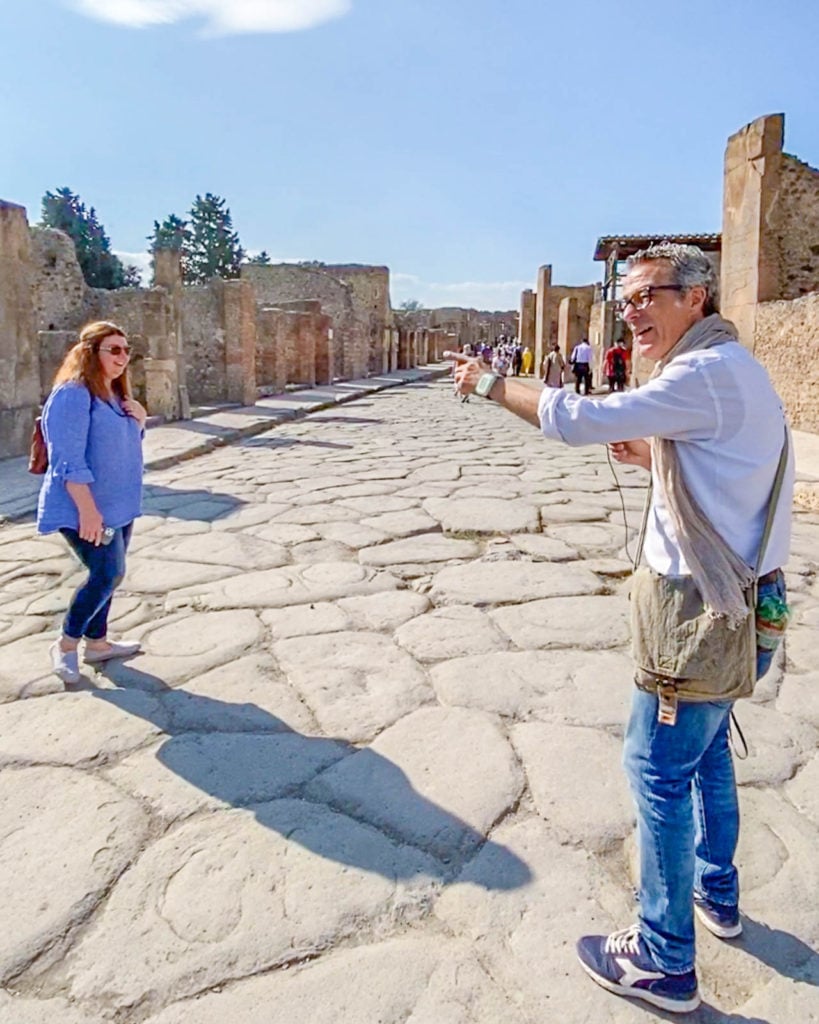 On my recent trip to Rome, I chose to do the Full Day Pompeii Tour from Rome with Mt. Vesuvius Volcano by Dark Rome. The best part about traveling on a small group tour is that all you have to do is show up at the meeting point– the rest is fully covered! On this trip, we rode in a climate-controlled bus from Rome to Pompeii.

So, even though the tour starts early, you can take a little nap on the way there! After a long day of touring Pompeii and hiking Mt. Vesuvius, you’ll also be able to rest on the way home. I felt a lot more comfortable traveling in a private bus in comparison to taking the train on my own.

Another advantage of visiting Pompeii with Dark Rome was the skip-the-line access. When you only have a few hours to see Pompeii, it’s crucial to make the most of your time. So, it can be a considerable disappointment to arrive at this ancient city during high season and have to wait in a long line before going in! On our guided tour, we arrived, our guide picked up our tickets in mere seconds, and we immediately entered the archeological site.

From there, we had plenty of time to see the main attractions of Pompeii. I also enjoyed being with a much smaller group while wandering in this ancient city. I noticed that other tour companies had groups with 30+ people, making it hard to hear and follow the guide! Dark Rome, on the other hand, caps group size at 15-25 depending on the tour.

As I mentioned above, I chose the full day trip to Pompeii with Dark Rome that also included Mt. Vesuvius. Nonetheless, I also wanted to make sure to point out other Pompeii tour options with Dark Rome in case you would prefer a different trip! Below are three tours from Rome to Pompeii that you might want to consider:

Read More: The Best Things to Do in Rome at Night

So, you’ve decided you want to take a day trip to Pompeii! Maybe now you’re wondering: what will I be able to see there? In this section, I’ll go over the main attractions at Pompeii that you won’t want to miss during your visit.

If you’d like to see how some of the wealthiest citizens of Pompeii lived, make sure to stop by the House of Menander (pictured above). Throughout the estate, you’ll be able to find many well-preserved frescoes. This house was created in a way to show off its owner’s success and prominence, including the location, the art inside the home, and the estate’s large size (approximately 19,000 sq ft).

It may seem strange, but the thermal baths were one of the most important places in Pompeian society. Here, people would come not only to bathe but also for social purposes. Furthermore, people of all social classes were allowed to enter these public baths, even slaves. The Stabian baths are the oldest in Pompeii and are divided so that men would go to the baths on one side and women on the other.

In 1863, during the excavations of Pompeii, Giuseppe Fiorelli had a breakthrough. He discovered a new technique that revealed the shapes of the victims at Pompeii. By injecting plaster into voids left in the volcanic ash, he was able to produce casts of the bodies that had been buried for centuries. This discovery provided crucial information to archeologists about how the victims had died. During your visit, you’ll be able to see several plaster casts throughout the site.

The Pompeii Forum would’ve been one of the busiest spots in the city because it housed various temples, municipal offices, and the primary food market in Pompeii. Here, you’ll also find the public bathrooms that Pompeians would’ve used. Notice that there are no partitions between seats–Pompeians used the bathroom as a place to socialize!

The large and small theaters of Pompeii were important centers of entertainment and socializing. The free citizens of Pompeii came here to see tragedies and comedies, all without having to pay a fee. We can tell how key these theaters were to ancient Pompeii due to the number of people that they can hold. Although Pompeii only had approximately 12,000 inhabitants in total, 5,000 spectators could fit into the large theater alone.

Is Pompeii worth visiting? 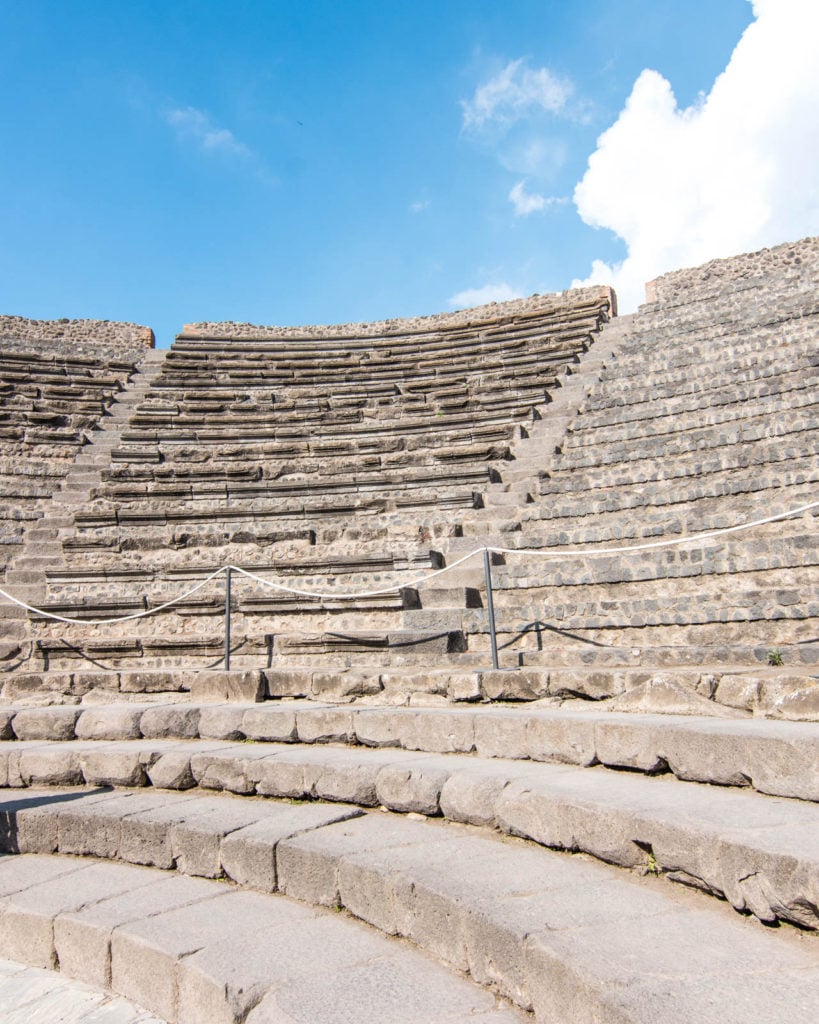 I think Pompeii is 100% worth visiting as a day trip from Rome. Even if you don’t have a ton of room in your schedule, you can still visit Pompeii by high-speed train and be back in Rome within a few hours. All in all, Pompeii makes for both an affordable and low-stress day trip. Although you’ll see ancient architecture in Rome, like the Colosseum, Pompeii is a chance to see an entire town from the first century.

Plus, this city has something for everyone, even if you aren’t a history buff! If you’ve already visited Pompeii during a previous vacation to Italy, it might even be worth visiting again. As I mentioned earlier, archeologists are continuously working at Pompeii and making discoveries. Therefore, new findings may be on display that you didn’t get a chance to see on your previous visit. 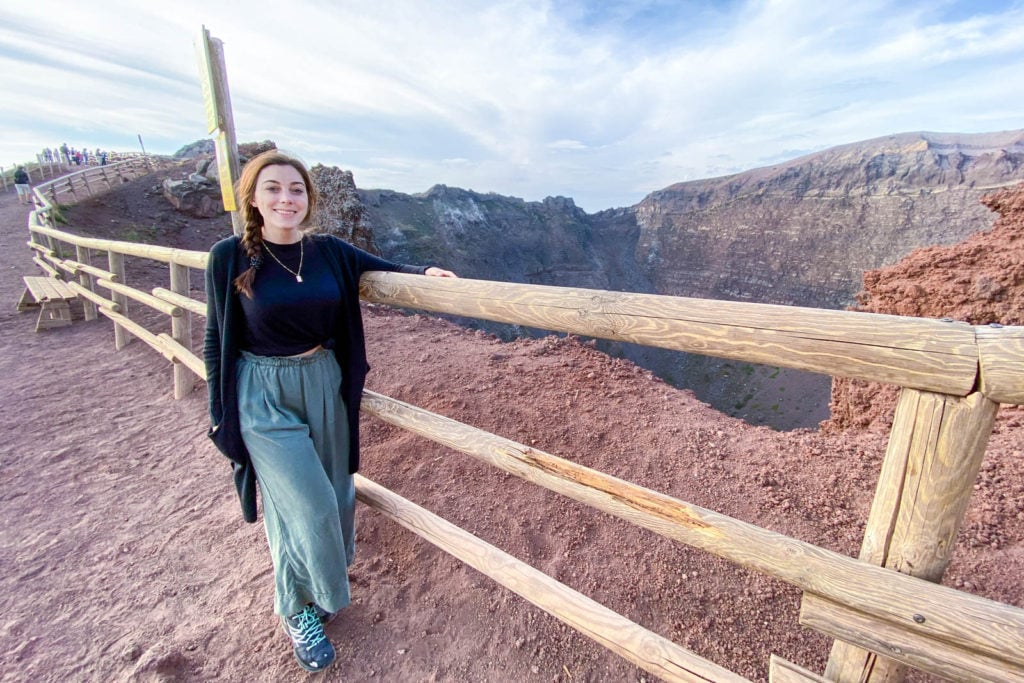 On my tour from Rome to Pompeii with Dark Rome, the day was split between two activities: we spent the first half of the day exploring the Pompeii archeological site and the second half climbing Mount Vesuvius. Before you get too worried, the climb to the top of Mt. Vesuvius wasn’t bad at all!

In fact, the bus drives you most of the way. Then, our guide gave us plenty of time to make our way to the top, snap a few photos, and drift back to the bus. I strolled to the summit, and I believe it took me approximately 20-25 minutes to go up. From the top of Vesuvius, you can spot Pompeii and the Bay of Naples in the distance.

Although hiking Mt. Vesuvius hadn’t been initially on my Italy bucket list, I enjoyed it! After spending a few days in the busy city of Rome, the hike was a breath of fresh air and a chance to marvel at nature. Plus, how many people can say they’ve hiked to the top of an active volcano?

In fact, its last eruption was in March 1944. While Mt. Vesuvius is undoubtedly considered to be dangerous, its activity is well monitored, and tourism to this site is entirely safe. However, be aware that you won’t be able to visit during the wintertime–Mount Vesuvius is only open to the public from April to mid-November!

What to wear visiting Pompeii and Mt. Vesuvius 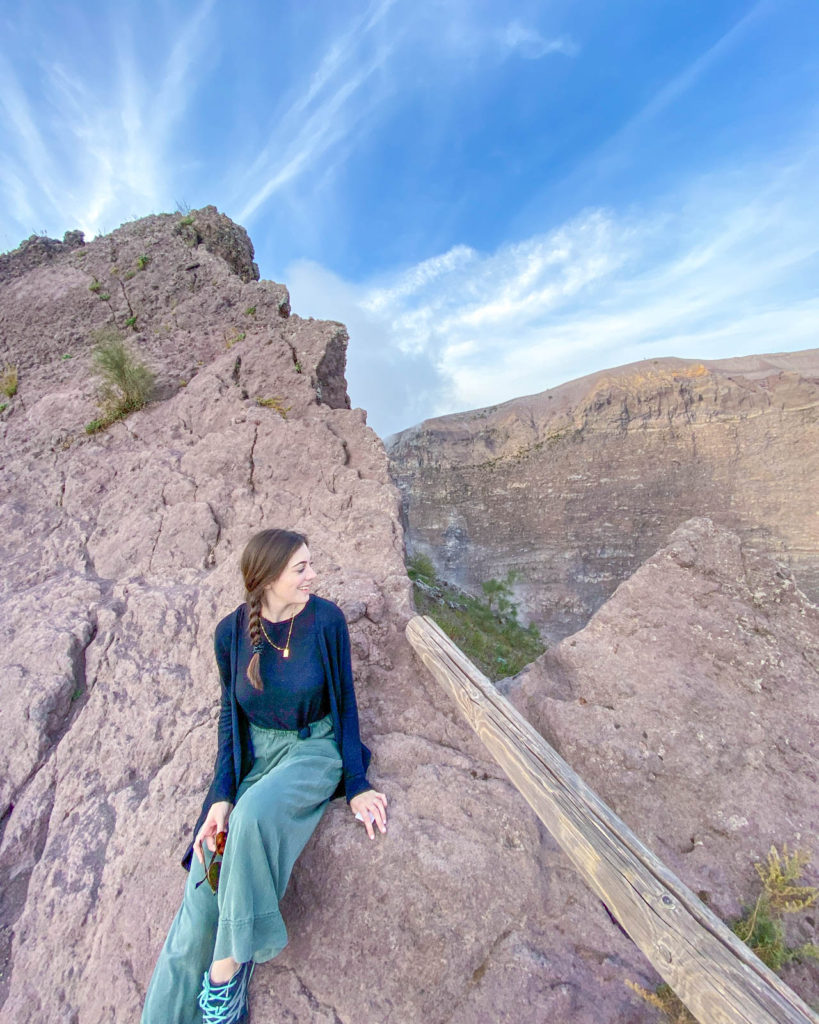 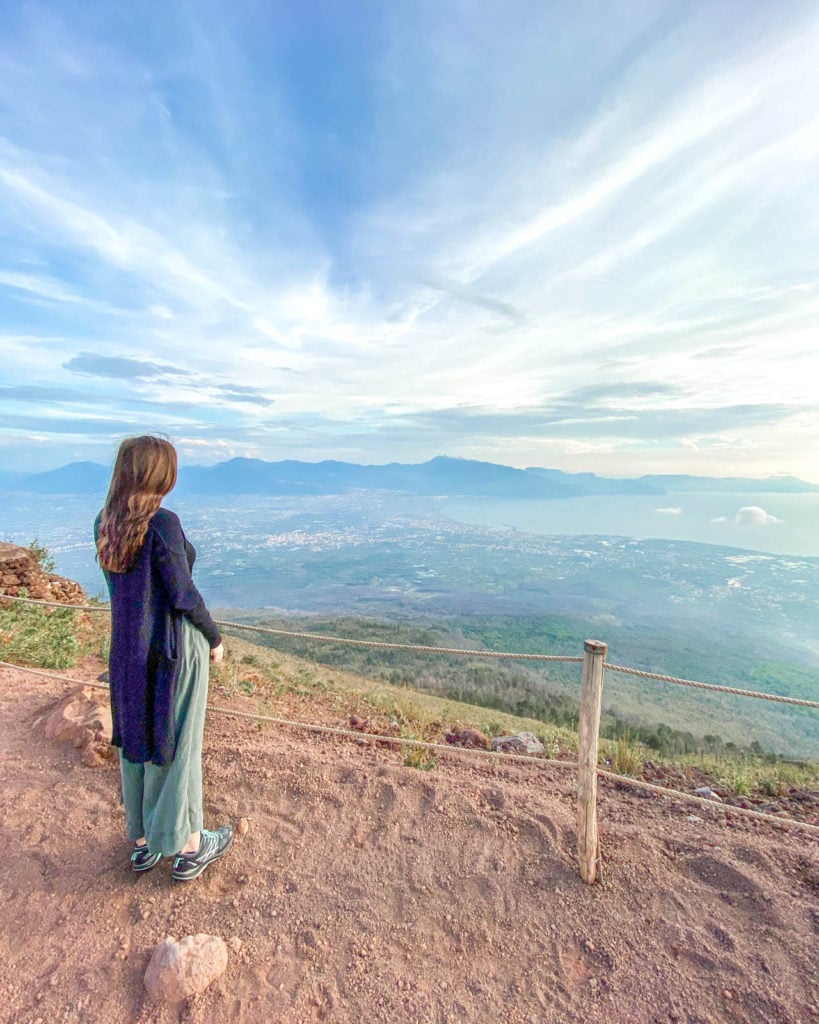 When visiting Pompeii and Mt. Vesuvius, it’s important to dress comfortably. Both sites are entirely outdoors and involve lots of walking. So, especially if you’re visiting during the summer, I’d recommend wearing clothing made with breathable fabric. Furthermore, you’ll want to pack sunglasses, sunscreen, a hat, and a reusable water bottle.

Flat and comfortable walking shoes will make exploring Pompeii both more relaxed and more enjoyable. I would also avoid wearing white shoes as you’ll be walking mainly on loose gravel and packed dirt.

If you’re visiting during the fall, pack clothes that you can layer. For example, I wore a short-sleeved shirt with a long cardigan over it. If you’re planning to hike Mt. Vesuvius, the road to the top is long and windy. Thus, if you happen to struggle with motion sickness, you may want to pack Dramamine to be safe! 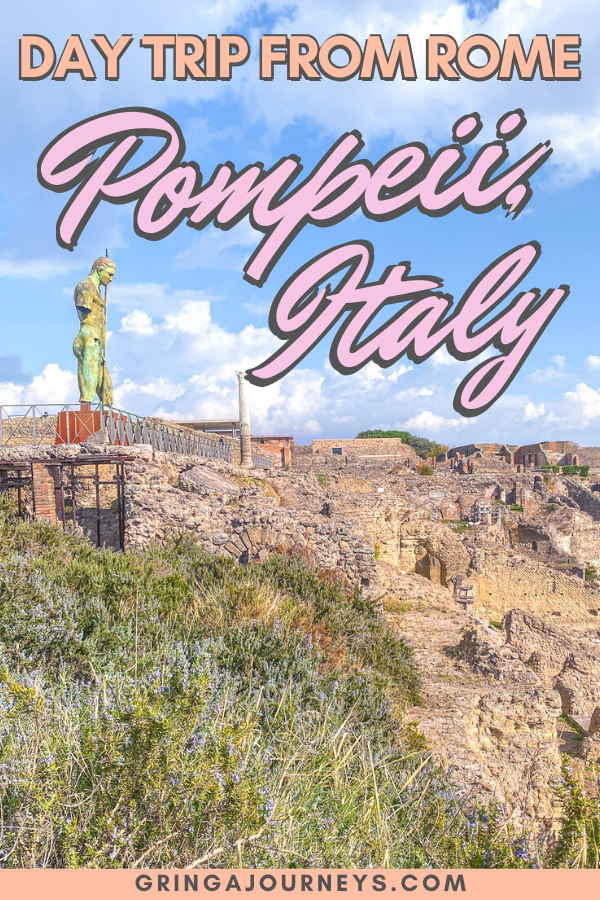 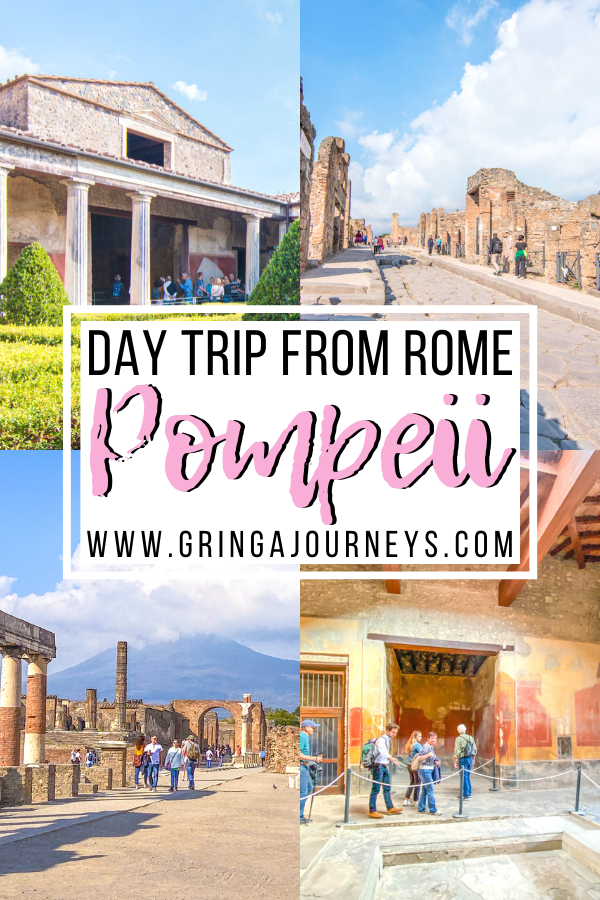 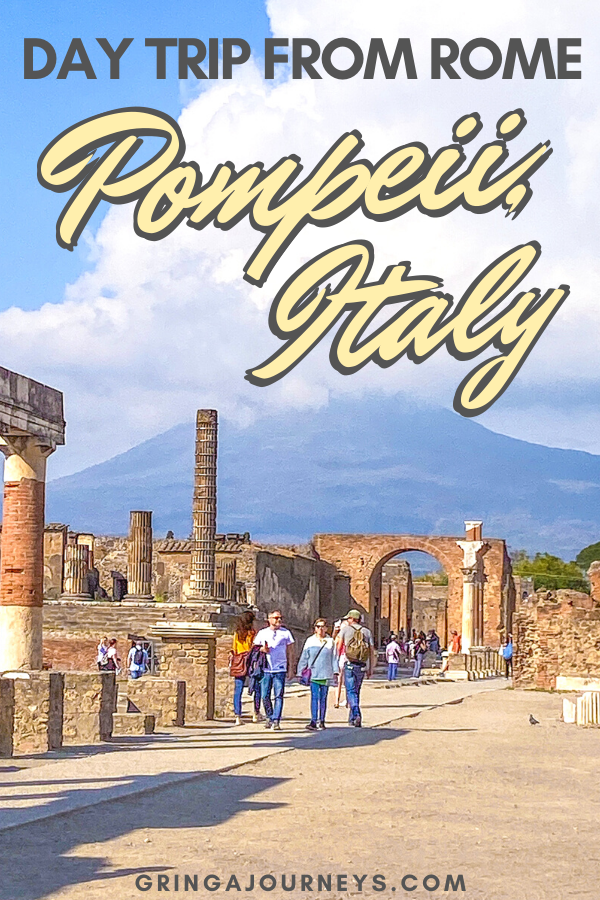 This post was written in collaboration with Dark Rome as part of a press trip. I received a complimentary tour of Pompeii from Rome. However, all opinions are my own, and I do highly recommend booking your day trip to Pompeii with Dark Rome. I did not receive any monetary compensation for this post.

[…] The “Eternal City” is frequently considered to be one of the most popular tourist destinations in the world. This ranking shouldn’t be a surprise, as Rome is home to important historical sites such as the Colosseum, St. Peter’s Basilica, the Vatican Museums, the Sistine Chapel, and the Pantheon. Due to Rome’s acclaim as a destination, you’ll want to plan your trip well in advance to secure tickets to the top attractions. I recommend checking out Dark Rome’s “no wait” tours. On your vacation to Rome, it’s also easy to add in a day trip to Pompeii. […]