Seville, Spain, is one of the most charming cities in Andalusia. Known for flamenco, La Feria de Abril, and UNESCO World Heritage sites, it’s no surprise that this town is at the top of everyone’s bucket list. Furthermore, Game of Thrones fanatics will be excited to know that part of the show was actually filmed here.

That’s right, Seville is home to some of the most picturesque places from the series that captured millions of viewers over its eight seasons. In this article, we’ll list all of the Game of Thrones filming locations in Seville. Although you won’t see the characters themselves, all of these places are 100% worth a visit in real life.

Disclaimer: This article contains affiliate links. I may earn a small commission when you purchase a product or book a stay through these links at no extra cost to you.

The Royal Alcázar of Seville 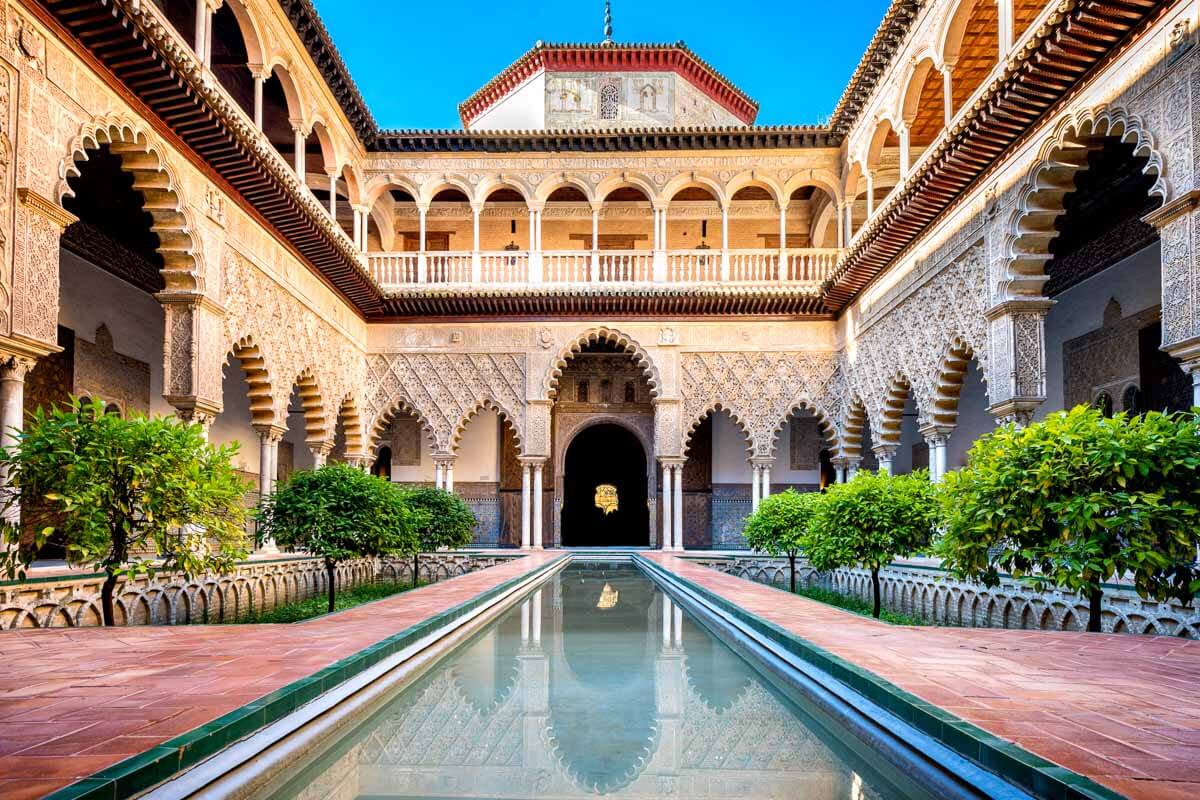 The Royal Alcázar of Seville (Real Alcázar de Sevilla) is a palace originally built for King Peter of Castile (Pedro I de Castilla) between 1364 and 1366. Although it was constructed during the Christian era in Seville, the Alcázar was actually built in the Andalusian Mudéjar style.

Therefore, the entire palace is a stunning mixture of Christian and Moorish architectural styles. For example, the ceilings are painted gold, and the walls are covered with vibrant tiles everywhere you look. With this in mind, it’s easy to see why directors chose this location as the main seat of Dorne.

In the series, Dorne is the southernmost of the Seven Kingdoms of Westeros (the Six Kingdoms, by the end of the show). Moreover, this region holds highly different customs from the rest of the Continent as well as a distinct climate.

For example, Dorne is the warmest of the Seven Kingdoms, featuring the only desert in Westeros. In the fifth season, the Alcázar of Seville takes on the role of Sunspear castle, the seat of House Martell.

You can catch scenes filmed in Seville in episodes 2, 6, 7, and 9. The directors were initially drawn to this location thanks to the Royal Alcazar’s photogenic water gardens. In the end, the creators chose several sites within the palace to depict Dorne, which we’ll detail below.

The Pond of Mercury 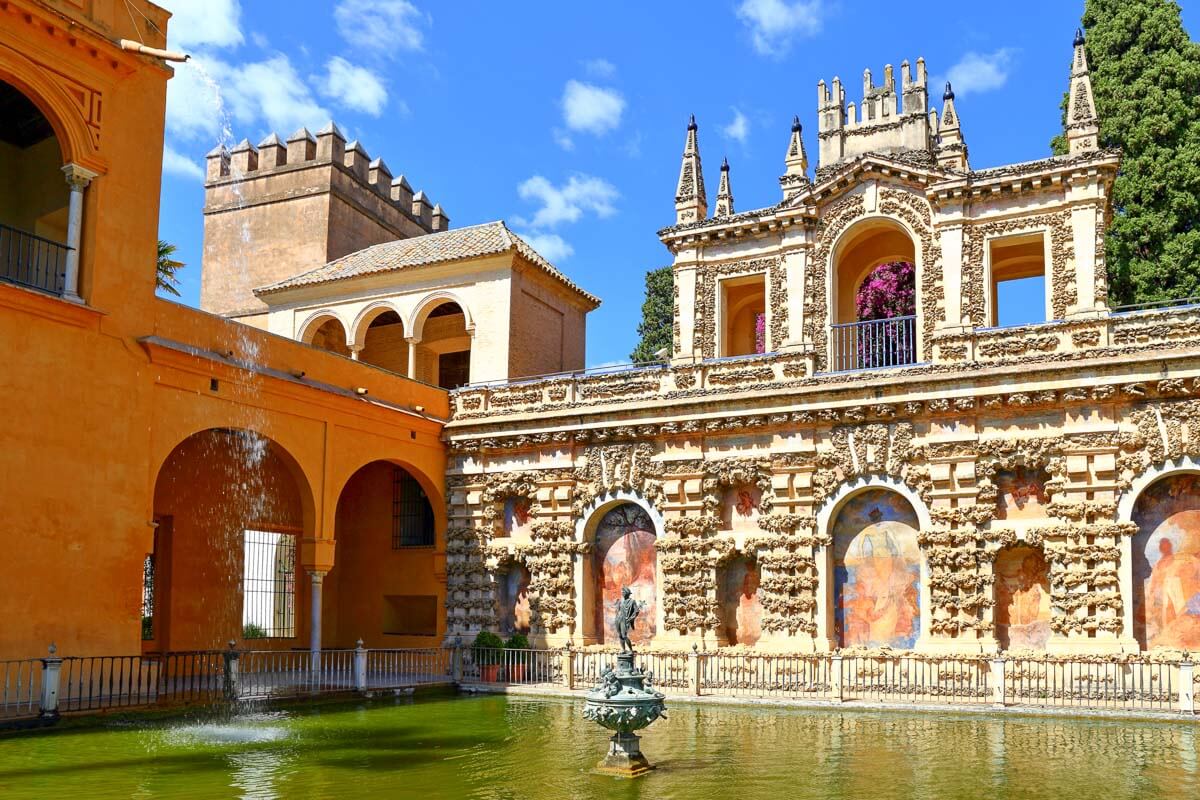 The Pond of Mercury, or El Estanque de Mercurio, contains a small fountain with a statue of the Roman god Mercury in the middle. Diego de Pesquera created this bronze statue, which Bartolomé Morel cast in 1576.

The pool sits at the same level as the castle and is, therefore, slightly higher than the rest of the gardens. If you’re a fan of Game of Thrones, you may recognize this location from Season 5, Episode 2.

During this episode, Jaime travels to Dorne to bring Myrcella back home to safety in King’s Landing. The princess is living in Sunspear at this point and is betrothed to Trystane, the heir to Prince Doran Martell.

We catch a glimpse of the Pond of Mercury when Ellaria Sand goes to speak to the prince. As she demands retribution for her lover’s murder (Oberyn Martell), you may notice that the prince is sitting on a terrace overlooking this pond, as well as the Grotto Gallery.

The Hall of Ambassadors 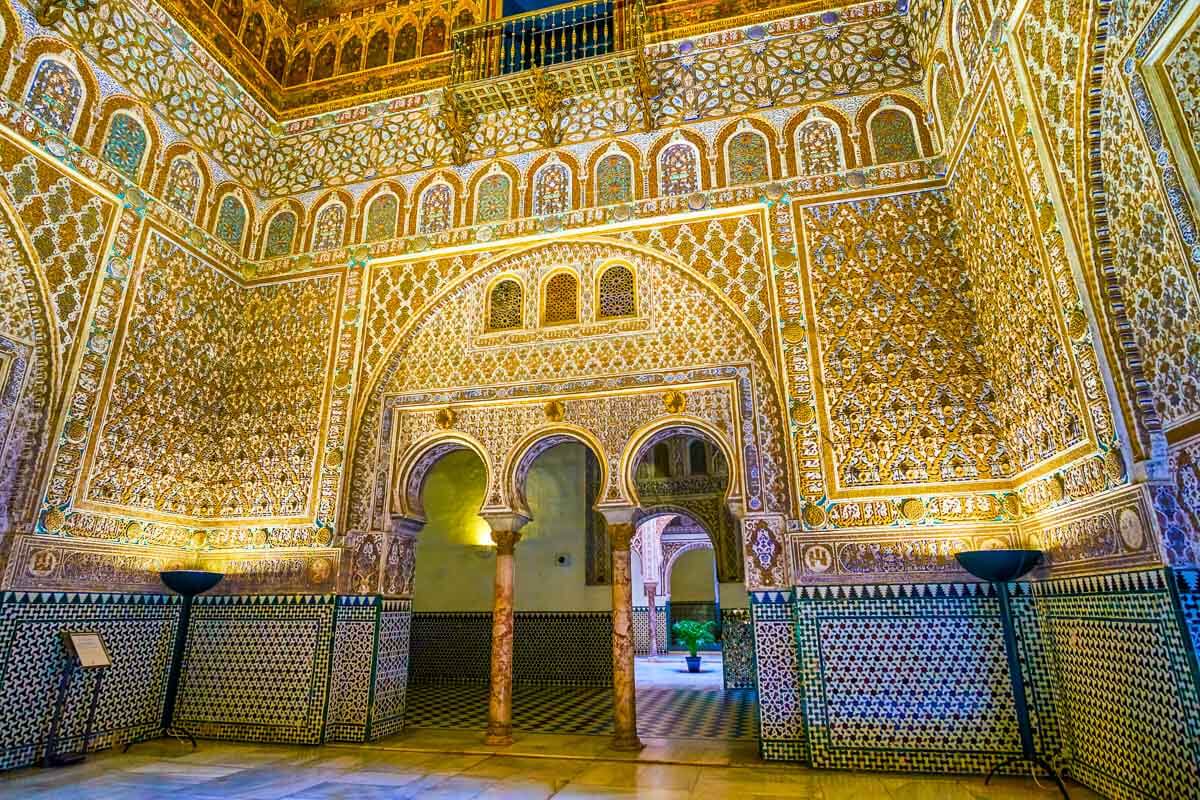 The Hall of Ambassadors (El Salón de Embajadores) is considered one of the most breathtaking rooms in the royal palace. Additionally, this hall also has another name, “the Throne Room,” indicating its purpose throughout history.

When you first walk in, be sure to look up! You’ll notice an opulent gold dome. This incredible piece of interlaced wood was created by Diego Ruíz, a master carpenter who carved these intricate star patterns.

In Season 5, Episode 9, Jaime meets with Prince Doran here to explain his presence in the palace. Jaime reveals that he came to retrieve Myrcella (his niece/daughter–in true GoT style) after receiving a threatening message from Dorne. The prince then connects the dots that Ellaria Sand is obviously behind the threat.

Thus, he grants Jaime’s freedom and allows Myrcella to return to King’s Landing. In the show, the directors didn’t have to do much to make this set exemplary of Dorne. However, they did add curtains, furniture, and plants to make it look more like a functioning palace. 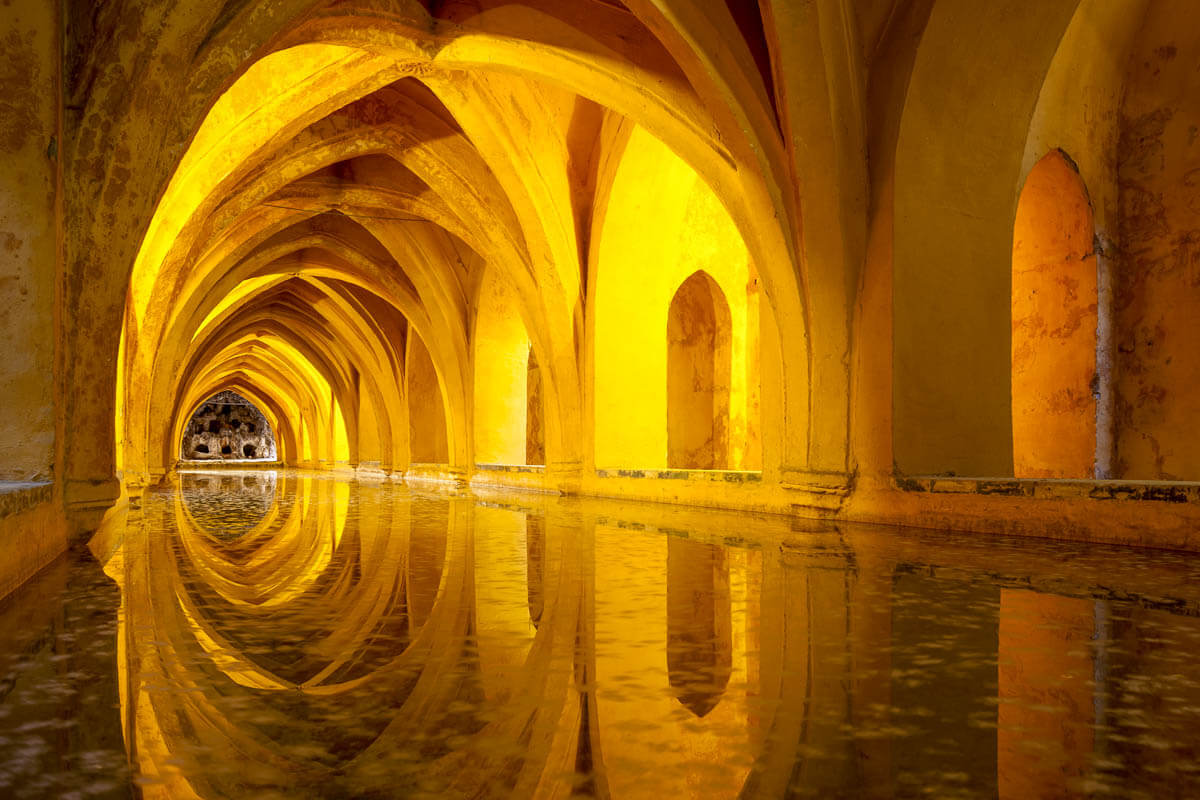 The Baths of Lady María de Padilla (Los Baños de Doña María de Padilla) are a series of rainwater tanks that lie beneath the Patio del Crucero. They are named after María de Padilla, a Castilian noblewoman who was the mistress of King Peter of Castile (also known as Pedro “el Cruel”).

Legend says that she would come to bathe in these tanks, although no one knows if this is true! In Game of Thrones, Ellaria Sand meets with her daughters (the infamous “Sand Snakes” by the Baths of Lady María de Padilla in Season 5, Episode 6.

Here, the women begin to plot their revenge for Oberyn Martell’s murder. You’ll notice that it’s pretty fitting that Ellaria Sand, a former mistress, takes on the meeting place of María de Padilla. 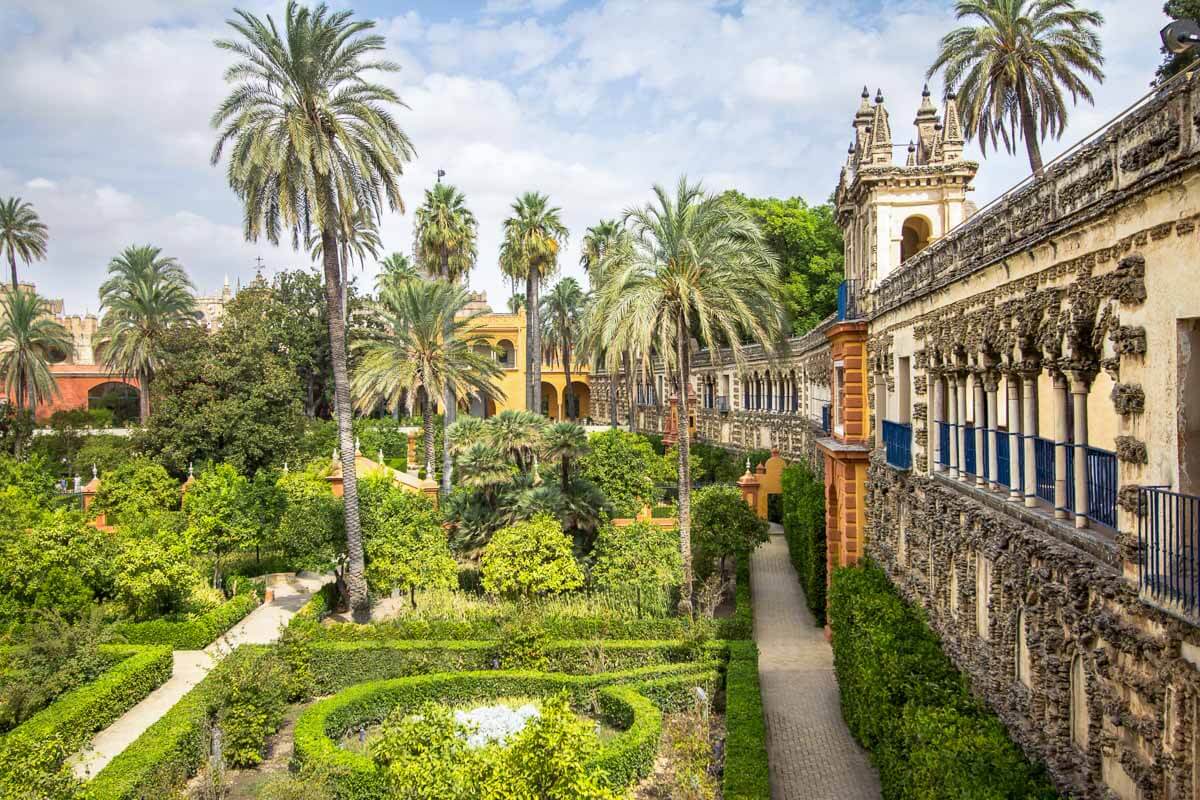 The gardens at the Real Alcazar of Seville are so extensive that you’ll need at least an hour to explore just this section of the palace. Here, you’ll find orchards with fruit trees and many fragrant flowers.

If you’re visiting during the summer, make sure to come in the morning. The often sweltering Seville afternoons make a walk in the garden a bit uncomfortable!

In Season 5, Episode 6, you’ll notice the Pavilion of Carlos V (pictured above) as a Seville Game of Thrones filming location. It’s where Jaime confronts Myrcella and Trystane after infiltrating the gardens.

Unfortunately, the Sand Snakes arrive and ambush him. Thus, a short battle ensues until Martell soldiers arrest both of the involved parties.

The Seville Shipyard, or Las Atarazanas de Sevilla, is one of the world’s best-preserved medieval shipyards. Dating back to the 13th century, the Royal Fleet was built here before sailing off to explore the New World. In Game of Thrones season 7, the Royal Shipyards were used as the set for the Red Keep’s dungeons and crypt in King’s Landing.

Other Filming Locations Close to Seville

The Osuna Bullring (Plaza de Toros de Osuna) represented Danzak’s Pit in the city of Meereen, one of the three city-states of Slaver’s Bay. In Season 5, Episode 9, this location is introduced as the most extravagant fighting pit in Meereen. Here, the Sons of the Harpy attempt to murder Daenerys. However, she’s able to escape at the last second on her dragon, Drogon.

The Roman Ruins of Itálica 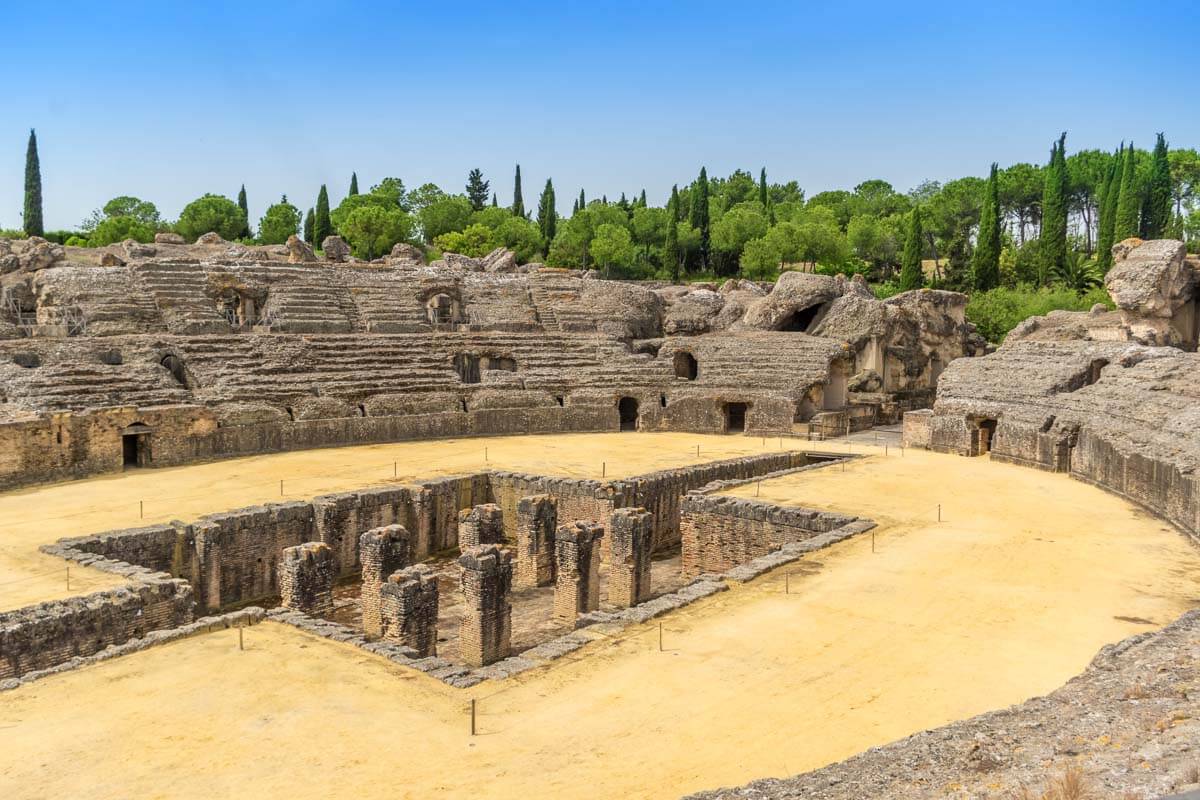 The Hadrianic city of Itálica, just outside of Seville, is a UNESCO World Heritage Site candidate. The historic Roman amphitheater located here provided an ideal spot to create the Dragonpit in King’s Landing. In fact, this arena appears in some of the most famous episodes of Game of Thrones, the season 7 and 8 finales.

In season 7, Jon and Daenerys meet with Cersei here to attempt to convince her to join them in fighting the Army of the Dead. Then, in season 8, many of our favorite characters reunite here to decide the fate of Jon and Tyrion, and who will be the next king.

We recommend this guided tour if you’d like to walk through “the Dragon Pit” and learn more about the history of this Roman city! If you happen to be heading to Northern Spain during your trip, you can see even more King’s Landing and Game of Thrones locations in Girona. For example, don’t miss the cathedral used for The Great Sept of Baelor.

The Castle of Almodóvar del Río

A little over an hour’s drive from Seville, you’ll find the Castle of Almodóvar del Río. This medieval castle served as two important locations on Game of Thrones.

Check out our favorite Seville travel guidebooks below! Click the cover the see more. 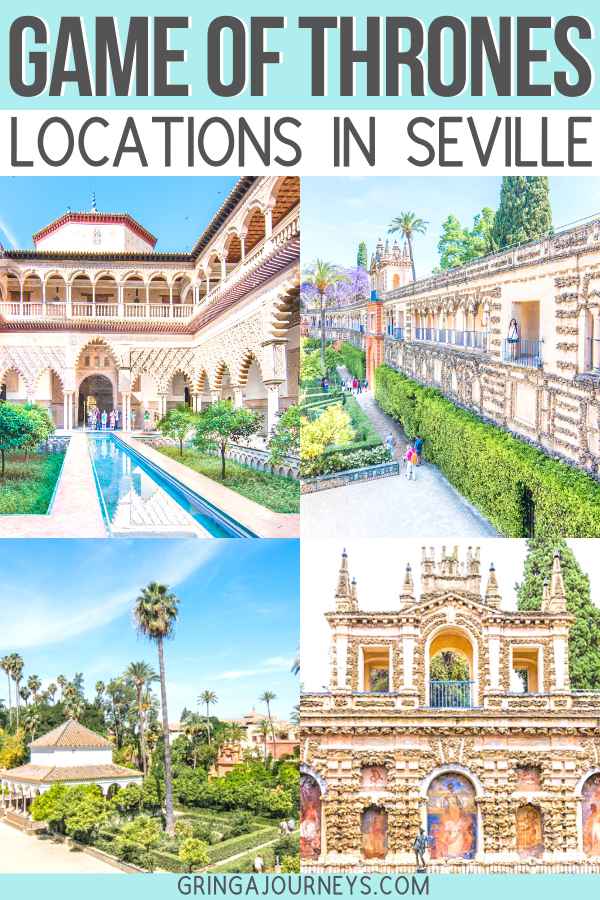 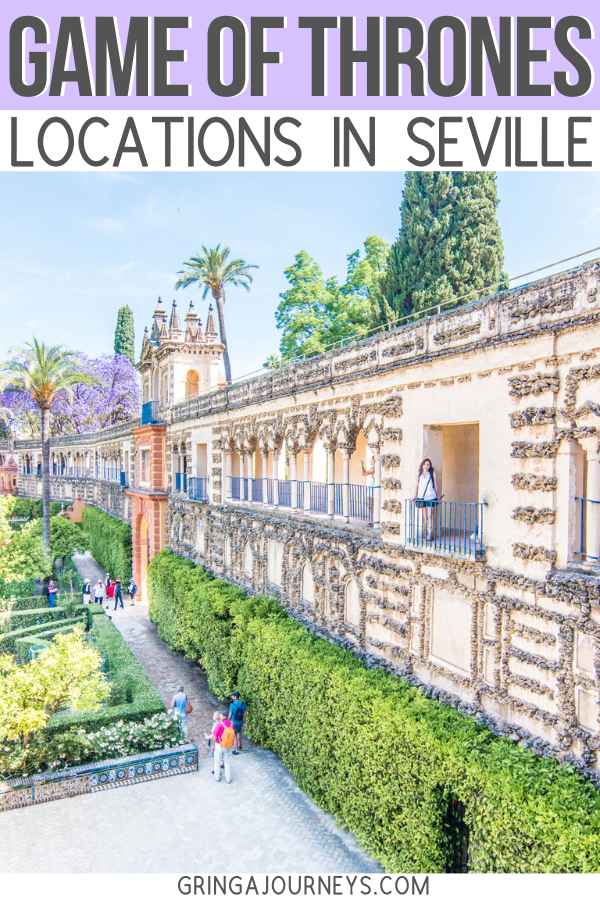 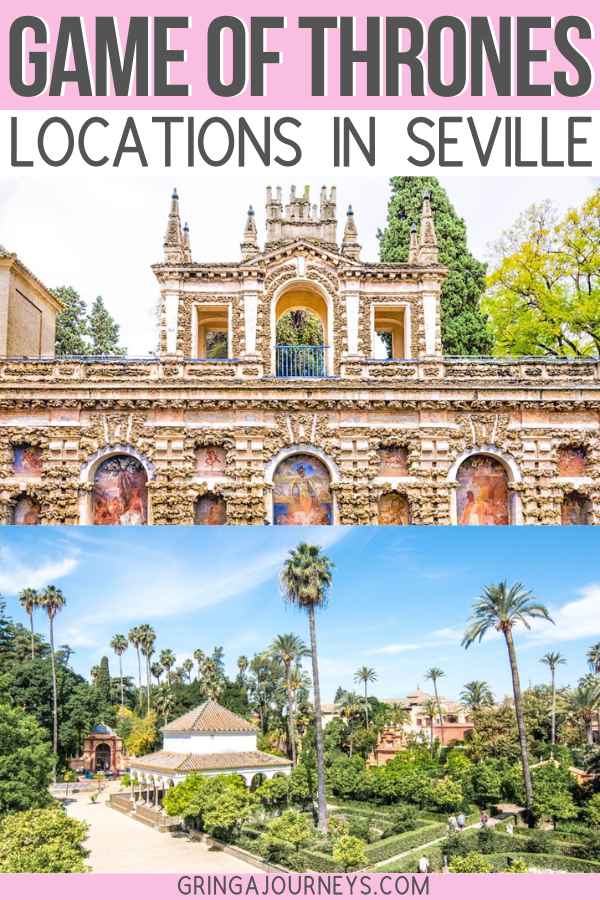 This article was initially published in July 2019 and has since been updated.

[…] Spain you shouldn’t miss. The main things to do in Seville include the Alcázar of Seville (GoT was filmed here!), the Seville Cathedral, the Plaza de España, and Casa de Pilatos. I would give […]

Hello! We went to Seville in last september and I didn't even think about GOT while visiting! Thanks you!

[…] Note that the season 5 of Game of Thrones was also filmed a lot in Seville, Spain! […]